The strong looking batting line up of Auckland Aces surrendered to the quality bowling of the Titans who piled up mammoth runs as well and won superbly.

The Titans blasted 172 for the loss of just four wickets after consuming the allotted 20 overs. The innings of Auckland Aces was rolled back for 113 mere runs with 11 balls to spare.

Farhaan Behardien (Titans) was declared ‘Player of the match’ for his enterprising batting of unbeaten 48 runs in 23 mere balls.

The Champions League Twenty20-Group A match, was held on Wednesday, October 17, 2012, at Kingsmead, Durban.

Gareth Hopkins, won the toss for Auckland Aces and opted to bowl first on a wicket that seemed full of runs. The Titans got in to bat with Henry Davids along with Jacques Rudolph and preferred an offensive batting while dispatching 5 fours in the first three overs. They kept the pace of scoring when Davids hit 13 runs in the seventh over with 1 six and 1 four as Rudolph was going side by side with him by getting regular boundaries. The pair rushed to 74 in 8.3 overs as Henry Davids was clean bowled by Azhar Mahmood for 36 off 23 balls with 1 six and 5 fours.

The next wicket contributed 26 runs as Farhaan Behardien got together with the solid going Rudolph who smashed his 14th T20 fifty in the 15th over. Jacques Rudolph was caught by Andre Adams off Michael Bates for 63 scored on 56 deliveries with 7 fours. The third wicket fell at 133 in 17.3 overs as Behardien  took control and gathered 18 runs in the 19th over with 2 huge sixes and 1 four. He remained unbeaten for 48 off just 23 deliveries that comprised 3 lofty sixes and 1 four as Titans blitzed 172 with six wickets in hand at the end of the 20th over.

Kyle Mills, Michael Bates and Azhar Mahmood were the only successful bowlers with one wicket each.

Auckland Aces had a bleak start of their innings by losing both openers for just 10 runs in 2.5 overs. Martin Guptill was caught by Behardien off Ethy Mbhalati for 3 and Lou Vincent was caught behind by the wicketkeeper Heino Kuhn at the bowling of Alfonso Thomas on 6 runs. The batsmen in-form, Azhar Mahmood and Anaru Kitchen tried to establish the innings at a captious situation as the latter hit 3 fours in the fifth over. Their association did not last longer, Azhar Mahmood lost his wicket for seven and the visitors were reeling at 3-37 in 5.1 overs.

Anaru Kitchen became the next causality after the addition of 12 runs to the total at his individual score of 23 off 12 with 1 six and 3 fours. That was the beginning of the disaster for the Auckland Aces as the Titans bowlers became unplayable. There was a panic like situation for the batsmen and the wickets were crumbling at regular intervals.

Auckland Aces were 9-68 in 11.4 overs when Andre Adams and Michael Bates provided some resistance. Adams was the most determined of the two as he hit a couple of sixes and 1 four in the 13th and 14th overs. The score board touched 100 in the 16th over and the courageous last wicket association concluded after collecting 45 runs. Andre Adams was gone for 30 off just 17 balls with 2 sixes and even fours as Auckland Aces managed 113 runs in 18.1 overs before they were bowled out.

The titans grasped the match in a compelling way by 59 runs and have accumulated 8 points after winning both their pool games whereas Auckland Aces lost their first pool match out of two they have competed in. 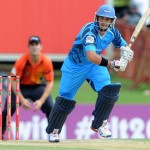 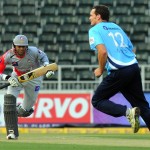 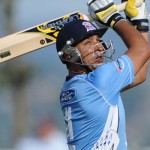