The home side declared their first innings at 604 runs for the loss of seven wickets and the visitors responded with 272 runs. The Kangaroos preferred to call it a day after scoring 167 runs after losing five wickets and India was six wickets down with only 166 runs on board in their second innings. They need another 334 mountainous runs to avoid the certain defeat hanging over their heads.

Their fate will be written on the fifth day on January 28, 2012, at Adelaide Oval and just weather can save them from the defeat.

Earlier Aussies started the fourth day at 50 runs with three batsmen back to the pavilion in 14 overs, Ricky Ponting and Michael Clarke were unbeaten on one and nine runs respectively.

Zaheer Khan and Ishant Sharma opened the attack for India as Ponting and Clarke were watchful in the initial overs. Ponting opened up in the 20th over while dispatching successive fours to Sharma and enhanced the run rate. Clarke followed him few overs late and the hundred of the innings was achieved in the 27th over.

Clarke was caught behind by Wriddhiman Saha off Umesh Yadav gone after scoring 37 runs. Ponting went on to score 60 runs as Michael Hussey also lost his wicket at 15 runs. Clarke declared the second innings as Australia reached 167 runs with five wickets still in hand.

Ravichandran Ashwin was the highest wicket taker with two, Zaheer, Sharma and Yadav claimed one wicket each.
India had an uphill task of chasing 500 runs for the victory which looked impossible keeping in view their current form in the series. They faced an early blow when Gautam Ghambhir was caught at the wicket by Brad Haddin off Ryan Harris at just three runs. The first wicket fell at 14 runs when Rahul Dravid came to the centre to show his potentials for the last time in the series.

Virender Sehwag preferred aggression and changed the mode of his game accordingly and dispatched two fours in the sixth over bowled by Ben Hilfenhaus as Dravid secured the other end. Sehwag continued with style and hammered Peter Siddle for three boundaries in the eighth over and added another fifty to his tally in the 16th over while attaining a four over mid-off.

The stand in Captain Virender Sehwag was unable to continue his adventurous innings and was caught by Ponting off Nathan Lyon on 62 runs. The second wicket was lost at 80 runs and Sachin Tendulkar came in next to try his luck. He added 20 runs for the third wicket with Dravid before the later was gone after scoring 25 runs.

Sachin Tendulkar followed him after the addition of just 10 runs in the total at 13 and India was in dire trouble. VVS Laxman and Virat Kohli tried to consolidate and took the score to 162 runs before Laxman was caught by Shaun Marsh off Lyon at his personal effort of 35 runs.

Virat Kohli added their miseries after he was unluckily run out at 22 runs and the Indians were struggling at 166 for the loss of six wickets at stumps on the day four. Sharma was unbeaten on two and Saha has yet to open his account and the perishable tail to follow.

The off spinner Lyon was on top first time in the series with three wickets and Harris chipped in with two wickets.
Australia is in complete command of the game which may be over in the first hour of the fifth day. 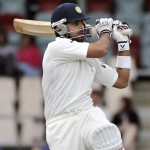 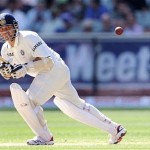 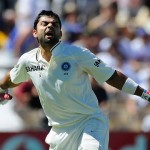 Australia on top besides Kohli sparks