Ajinkya Rahane was declared ‘Player of the match’ for his forceful innings of 98 off 66 balls while demolishing the rival bowling.

The 4th match of the IPL 2012 was played at Sawai Mansingh Stadium, Jaipur on April 6, 2012 and a capacity crowd witnessed the absorbing cricket.

Earlier, Adam Gilchrist, the Captain of Kings XI Punjab won the toss and offered the opportunity of batting first to Rajasthan Royals. The innings was opened by their most senior batsman and skipper Rahul Dravid accompanied by the rising star of India and Maharashtra, Ajinkaya. The latter made his intentions clear by sending the ball twice out of the boundary in the second over followed by 4 fours in the next. Dravid kept his end secured by scoring odd boundaries and became the first victim after scoring 28 runs off 24 balls with 3 fours.

The first wicket contributed 77 runs in 9.3 overs and Rahane completed his fifty on the first ball of the 11th over. Ashok Menaria was gone for a duck after facing three deliveries when10 runs were added to the total as Brad Hodge came in the centre. Rahane continued his attack and dispatched 15 runs in the 14th over with one six and two fours. He added two boundaries in the 16th over and three consecutive fours in the next and accumulated 75 runs for the third wicket.
Hodge was bowled by James Faulkner for 21 runs as Rahane was unlucky to miss his ton by just two runs when he was bowled by the same bowler. Rahane smashed 98 runs off just 66 balls assisted with one six and 16 fours as Rajasthan Royals piled up 191 runs with 6 wickets in hand.

James Faulkner was the highest wicket taker with two as Piyush Chawla and Harmeet Singh collected one wicket each.
Adam Gilchrist and Paul Valthaty initiated the innings for the Kings XI Punjab and the first 11 runs in the opening over with two fours. He repeated the feat in the fourth over by collecting 16 runs in the fourth over which included one six and two fours. The skipper lost his wicket in the next over for 27 runs from 18 balls with one six and 3 fours after contributing 36 runs for the first wicket.

Rajasthan Royals bowler Kevon Cooper produced a deadly spell and earned three wickets of the top order batsmen of the Kings XI Punjab and they were reeling at 86 for the loss of five wickets in 11.2 overs.

Mandeep Singh and Bipul Sharma tried to stabilise the innings as the first was the more aggressive of the two and earned boundaries quite often. They added 37 runs for the sixth wicket when Bipul Sharma lost his wicket for 18 and Mandeep Singh followed him four runs later for 34 off 25 balls with 5 fours.

The wickets kept on falling regularly with a little resistance from the lower order batsmen as they could score 160 runs for the loss of nine wickets.

Kevon Cooper broke the back of the rival batting by grabbing four wickets, Ankeet Chavan held two as Siddharth Trivedi and Amit Singh claimed one wicket each.

Rajasthan Royals won their first match of the tournament and secured two points after winning the important encounter. 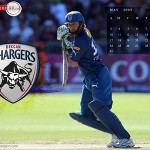