A match winning fourth wicket association between Shane Watson and his captain, Michael Clarke, led their team to a comfortable win against the hosts England.

The Kangaroos hammered 298 runs before they were bowled out in 49.1 overs and England was restricted to 249 with two overs still remaining.

Shane Watson (Australia) was declared ‘Player of the match’ for his outstanding knock of 143 off 107.

Michael Clarke (Australia) was announced ‘Player of the series’ for his superb batting. He smashed 202 runs at an excellent average of 67.33 with the best of 105.

The fifth and final One Day International of the series was played on Monday, September 16, 2013, at The Rose Bowl, Southampton.

Earlier, Michael Clarke won the toss for the visitors and sent his batsmen in to start the proceedings. They lost the first wicket at 13 as Shane Watson got together with Aaron Finch who became the next victim at 48 after scoring 26 runs. Matthew Wade could not open his account and Clarke walked in next when his team was in dire trouble at 3-48 in 9.5 overs. The batsmen opted to attack and started sending the ball out of the fence at regular intervals. The 14th over produced 12 runs with a couple of fours and Clarke took lead by hitting the first six of the innings. Shane Watson went past his fifty in the 22nd over with 1 six along with 2 fours and hit another 2 sixes in the coming overs.

Michael Clarke attained his 55th ODI half century in the 28th over and the English bowlers were looking helpless to stop the boundaries. The score was enhanced to 211 in 31.6 overs when Clarke was caught by Kevin Pietersen at mid-off at the bowling of Chris Jordan for 75 off 76 balls with 1 six and 10 fours. Shane Watson took over from thereon as the wickets kept on crumbling at the other end. He blasted his 8th ODI hundred then punished Joe Root for 26 runs comprising 3 lofty sixes and 2 fours. Watson was finally caught behind by Jos Buttler off Ben Stokes for 143 from 107 mere deliveries with 6 towering sixes and 12 fours. The entire Australian side was bowled out for 298 with five balls still left in the game.

Ben Stokes was the star performer with five wickets, Chris Jordan held three whereas Boyd Rankin and Joe Root claimed one wicket each.

England faced a severe blow when their prolific opener, Kevin Pietersen, ran himself out in the very first over. Joe Root joined in next with Michael Carberry who was dropped twice on the first two balls of the fifth over. They took the score to 50 in 12.5 overs as the latter was declared leg before wicket off James Faulkner for 30 off 50 with 4 fours. The skipper of the hosts, Eoin Morgan, walked in next and hit 10 runs in the 14th over with 2 fours whereas the stumps of Root were broken by Mitchell Johnson for 21. Luke Wright was the second batsman who was runs out for a duck and the home side was reeling at 4-68 in 16.5 overs.

Ravi Bopara associated with Morgan and they were unable to score any boundary until the time they were together. The first was held lbw at 4 by the field umpire Aleem Dar but the batsman survived while claiming a review. The fifth wicket partnership was dislodged at 103 after 25.1 overs when Eoin Morgan was smartly stumped by Wade off Adam Voges for 30. Jos Buttler appeared in the park next and started pouring the boundaries with Bopara who reached his 11th ODI fifty in the 35th over. Buttler got 4 fours until the end of the 38th one but was gone at 195 after contributing 42 runs.

Ravi Bopara followed him two runs later for 62 off 66 deliveries with 5 fours and his side was in trouble once again. Ben Stokes scored 27 runs as the innings of the home side was squeezed for 249 in 48 overs.

James Faulkner was the highest wicket taker with three, Mitchell Johnson got two scalps whereas Fawad Ahmed, Adam Voges and Shane Watson shared one wicket each.

Australia triumphed in the fifth and final One Day International by a margin of 49 runs and clinched the series 2-1. 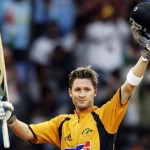