Pakistan outplayed Sri Lanka in every department of the game while beating them by six wickets and confirmed their berth in the final of the Asia Cup 2012.

The Islanders were bowled out for 188 in 45.4 overs and the Green Shirts thrashed 189 runs after losing just four wickets in 39.5 overs.

Aizaz Cheema was declared ‘Player of the match’ for his match winning performance as he grasped 4 wickets for 43 runs.

The third match of the Asia Cup was played at Shere Bangla National Stadium, Mirpur on March 15, 2012.

Earlier, Mahela Jayawardene won the toss, elected to bat along with Tillakaratne Dilshan and they adapted to attack the rival bowling from the word go. Aizaz Cheema was dispatched for 17 runs including three boundaries in the second over and was punished for couple of more in his next over.

Cheema struck on the first ball of his third over when the skipper was caught smartly by Mohammad Hafeez at extra cover for 12. The first wicket fell at 33 as the wall of the Islanders, Kumar Sangakkara appeared in the centre and the duel was started.

Dilshan became the second victim of Cheema when he scooped the first ball of the eighth over and Saeed Ajmal made no mistake. He was gone for 20 and the miseries were multiplied when two more wickets were lost at the total of 65in 14.3 overs.

Sangakkara and Upul Tharanga consolidated the innings and carried on with the repair task. The first  hundred of the innings was gathered in the 26th over as they were consolidating well without taking any chances. Both batsmen posted their fifties in the 33rd over and the proceedings were going well for them.

The Lankan Lions were having quite a few natives who came to support their team and cheered on every shot they played. The batting powerplay was taken in the 36th over which proved fatal as Tharanga was bowled by Saeed Ajmal for 57. The fifth wicket stand accumulated 96 runs and from that moment the Green Shirts bowlers captured the moments.

The wickets started tumbling and the last five batsmen were unable to catch the double figures. Sangakkara was the eighth batsman who went back to the pavilion for 71 as their innings was folded back for 188 with 26 deliveries to spare.

The Pakistani openers, Mohammad Hafeez and Nasir Jamshed looked subdued at the start of their innings and managed just 16 runs in the initial seven overs. They tried to accelerate but both of them departed one after another at 31 and the team looked in trouble when the experienced Younis Khan became the third victim at 33.

The Captain, Misbah-Ul-Haq and the young gun Umar Akmal got together at the crease and steadied the ship with caution. The loose balls got the required treatment as Umar dispatched three fours to Lasith Malinga in the 19th over. The duo opted to attack once they settled down and Umar got a chance when he was dropped at 46 by Lahiru Thirimanne at deep backward point at the bowling of Suranga Lakmal.

The chance was availed by the youngster as Misbah kept cruising at the other end and both of them achieved their fifties in the 34th over. The huge crowd appreciated the Green shirts on each shot they played as they carried supportive banners and national flags for them.

The onslaught was carried on until Umar Akmal was caught by Upul Tharanga on the bowling of Farveez Maharoof for 77 off 72 balls with two huge sixes and 7 fours . Pakistan was just four runs away from victory when Umar departed as Hammad Azam dispatched the winning four on the fifth ball of the 40th over.

Misbah remained unbeaten on 72 off 93 balls with the assistance of one six and 9 fours as the target was achieved by smashing 189 runs with six wickets in hand and earned the bonus point as well.

Pakistan has qualified for the final already altough they still have to play an important pool match against their arch rivals India on March 18, 2012. 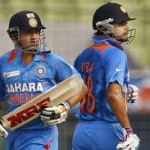