The Kangaroos declared their first innings at 604 runs for the loss of seven wickets and the visitors were reeling at 61 after losing two key wickets.

The second day’s play came to an end on January 25, 2012 at Adelaide Oval where the fourth and final Test is being staged.

Earlier Australia started the day at 335 for the loss of three wickets in 90 overs, Ponting was unbeaten on 137 and Clarke was playing at 140 and they had shared a partnership of 249 runs for the fourth wicket.

The duo started the day from where they left on the first day and the runs were accumulated easily with occasional boundaries. Clarke achieved his 150 with style by dispatching a four on the third ball of the 93rd over and Ponting followed him in the same manner three overs later.

The game was geared up by the two batsmen and the Indian bowling attack proved ordinary. Clarke celebrated his double century on the fourth ball of the 114th over by earning a four through extra cover few overs before lunch. He tried to accelerate the innings but was clean bowled by Umesh Yadav on the third ball of the 121st over just after the break. The dashing Captain contributed 386 runs for the fourth wicket as he went back to the pavilion at the total of 470 runs.

Ponting accomplished his sixth double ton on the third ball of the 123rd over while securing a four off a pull on the square leg boundary. He added 50 runs for the fifth wicket with Michael Hussey who was run out at 25 runs. The 37-year-old, ex-Captain lost his wicket after thrashing 221 runs once he was caught by Sachin Tendulkar at deep midwicket off Zaheer Khan.

Australia declared their first innings at 604 as they had lost seven wickets, Brad Haddin and Ryan Harris were unbeaten on 42 and 35 runs respectively.

Ravichandran Ashwin was the highest wicket taker with three, Zaheer held two victims and Yadav claimed one wicket as well.

India opened their first innings with style as Gautam Ghambhir dispatched the first ball for a four and gathered eight runs with Virender Sehwag in the initial over. Sehwag got a life at five runs when he was dropped at midwicket by Ed Cowan on the fifth ball of the second over bowled by Ben Hilfenhaus. He could not utilise the chance and was caught and bowled by

Peter Siddle on the first ball of the sixth over at 18 runs.

The first wicket fell at 26 runs and their worries were multiplied when Hilfenhaus uprooted the stumps of the wall of their batting, Rahul Dravid just after six runs were added in the total.

Gautam Ghambhir and Sachin Tendulkar saw the day off as India managed 61 runs without losing any further wicket at stumps, they were batting at 30 and 12 runs respectively. They are still 543 runs away from the first innings total of Australia, the pitch is helpful for the batting and requires determination from the batsmen. They can respond well with proper application and Tendulkar has an upright chance to clinch his 100th hundred. 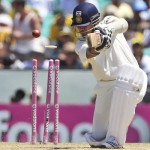 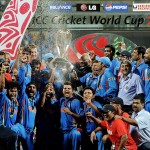