The Australian pace attack trounced India in the third Test at WACA, Perth, with a huge margin of an innings and 37 runs and put the future of quite a few of their batsmen in jeopardy. The Kangaroos achieved the hat trick of the glories and won the four match series 3-0 with one match to be played yet.

The visitors were bowled out at 161 runs in their opening innings, David Warner played a majestic and historic knock of 180runs which guided the home side to 369 runs in the first innings. The misery for India hyped as they were unable to cope with the destructive rival bowling who restricted them to 171 runs in their second innings.
The match was folded back in less than three days on Western Australia Cricket Association Ground, on January 15, 2012.

David Warner was the unanimous choice for ‘The Player of the match’ for his thunderous knock in the only innings of Australia.

Earlier India resumed their innings at 88 for the loss of four wickets in 32 overs, Rahul Dravid was unbeaten at 32 runs and Virat Kohli was assisting him with 21 at the other end.

Both batsmen started off with caution and later looked like strengthening the innings with occasional boundaries. Kohli was aggressive of the two and achieved his first fifty of the tour on the first ball of the 48th over when he dispatched Mitchell Starc for four towards the long on boundary.

Dravid was beaten time and again with the pace outside of his off stump and couple of balls missed the stumps by whisper. Australia had first success of the day when the wall of Indian batting Dravid’s wicket was demolished once he was clean bowled at 47 runs. The fifth wicket contributed the highest partnership of the innings by posting 68 runs when their Captain MS Dhoni visited the crease for a while as if he was going for a toss. He departed after scoring just two runs when Ricky Ponting snatched a brilliant low catch in the slips off Peter Siddle.

That was the start of the disaster for the visitors as rest of their batting looked timid against the lethal express attack of the Aussies as they have been exhibiting all through the series.

Kohli secured one end and the wickets started tumbling at the other side as the Australian bowlers got back their rhythm again. They ripped through their perishing late order batting once Ben Helfenhaus struck thrice in the 63rd over. The whole side was sent back to the pavilion on 171 runs as Kohli was the last batsman to be dismissed on 75 runs, four of their batsmen were unable to open their accounts.

Hilfenhaus was the chief destroyer with four wickets, Siddle captured three, Siddle got two and Ryan Harris chipped in with one wicket.

Australia had the third successive triumph against the depleted Indian side by an innings and 37 runs, won the series 3-0 and will be anticipating for a clean sweep by grabbing the last Test to be played at Adelaide from January 24th, 2012. 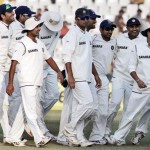 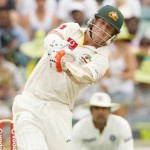 Australia in sight of a hat-trick on day three