England humiliated West Indies while beating them in the second Test and clinched the three match series 2-0 as Tim Bresnan struck with 8 wickets in the game.

The home team has yet to lose a Test series ever since the skipper, Andrew Strauss and the coach Andy Flower took charge of the national squad.

Tim Bresnan (England) was declared ‘Player of the match’ for his excellent bowling spell while grabbing four wickets in each innings of the encounter.

The second Test came to an end on the fourth day of the match on Monday, May 28, 2012, at Trent Bridge, Nottingham.

Earlier, West Indies started the fourth day in a dismal position at 61 for the loss of 6 wickets in 26 overs and required a sterling performance from the two not out batsmen, Marlon Samuels 13 and the captain Darren Sammy 0. The duo put the Windies back to stability in the first innings with a mammoth seventh wicket partnership of 204 runs as both of them scored individual centuries. The all rounder, Darren Sammy smashed his maiden ton in his 26th Test and lead the team from the front.

They had a cautious beginning, gathered 12 runs in the first six overs and picked up few boundaries as the first hundred of the innings was posted on board in the 39th over. The score was enhanced to 110 when Sammy was declared leg before wicket off Tim Bresnan for 25 runs. Kemar Roach decided to attack and dispatched three fours in the 45th over off Stuart Broad as Samuels secured his end while adding useful runs.

Marlon Samuels achieved his fifty on the second ball of the 51st over with a single as Roach lost his wicket for 14 two balls later. The first took charge by adding 16 runs in the 60th over off Graeme Swann with a couple of sixes and one four, remained unbeaten for 76 as the Caribbeans were bowled out at 165 on the first ball of the next over.

Tim Bresnan and James Anderson were the most successful bowlers with four wickets each whereas Stuart Broad and Graeme Swann claimed one wicket each.

England had a target of 108 runs to win the match and the innings was initiated with their competent openers, Andrew Strauss and Alastair Cook and they played three consecutive maiden overs. Strauss opened up with three fours in the fifth over and the home side reached 23 runs at the end of the 10th over as Cook managed just 6 off 29 balls. Strauss carried on consolidating as Cook tasted his first boundary in the 16th over and the first fifty of the innings was attained in the next over.

The Tea interval was taken after 21 overs as the score was enhanced to 74 as Strauss and Cook were at the crease with 40 and 33 runs respectively. The first wicket partnership provided a solid stand of 89 runs when Andrew Strauss was caught by Darren Bravo at extra cover off Marlon Samuels for 45 scored from 72 balls with 7 fours.

Jonathan Trott joined in next with Alastair Cook as the first scored the winning four on the fourth ball of the 31st over. The target was achieved by thrashing 111 runs, Cook was unbeaten for 43 and Trott was at the other end with 17 runs.

The formidable England side proved their strength in all departments of the game and won the match comprehensively by 9 wickets. The home side leads the series 2-0 and the third and final Test will commence from June 7, 2012 at Edgbaston, Birmingham. 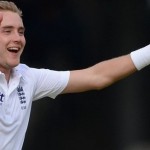 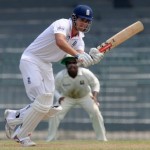