Ian Bell played a commanding knock by thrashing an unbeaten century which led England to a comfortable victory against India in the fifth ODI at Dharamsala.

India managed 226 runs before their innings was squeezed in 49.4 overs and England achieved the target by piling up 227 runs with 16 balls to spare.

Ian Bell (England) was declared ‘Player of the match’ for his herculean innings of 113 runs.

Suresh Raina (India) was declared ‘Player of the series’ for his outstanding batting. He was the highest run scorer from either sides with 277 runs at a gigantic average of 92.33 while having the best of unbeaten 89 runs.

The fifth and final One Day International was played on Sunday, January 27, 2013, at Himachal Pradesh Cricket Association Stadium, Dharamsala and that was the inaugural international match at the venue.

The England captain, Alastair Cook, won the toss and offered the batting to India who lost their first wicket for just 13 runs when Rohit Sharma was gone for just four runs. Tim Bresnan struck twice and got rid of the premium batsmen, Virat Kohli and Yuvraj Singh, when they had not opened their accounts. Suresh Raina joined in with the opener Gautam Gambhir and they scored nine runs in the 8th over with a four each. Raina got a life when he was dropped in the second slip by James Tredwell off Chris Woakes at five runs.

Raina got 3 fours in the 12th over as Gambhir was caught by Ian Bell off Tredwell for 24 and was replaced by the Indian skipper, MS Dhoni. Raina hit the first six of the match in the 19th over as Dhoni was declared leg before wicket off Steven Finn for 15. The Blue Shirts were struggling at 5-79 in 21.1 overs when Ravindra Jadeja walked in the center as Suresh Raina attained his 28th ODI fifty with a four ten overs later. Jadeja hit a couple of sixes during his innings and Raina was once again dropped by Cook that time in the 37th over. Jadeja became the next victim at 157 after contributing 39 runs as Raina kept on cruising from his end.

Suresh Raina was the seventh batsman who went back to the dressing room after smashing 83 off 98 balls with 2 big sixes and 8 fours. Bhuvneshwar Kumar played an entertaining knock of 31 from 30 deliveries with 5 fours as the Men in Blue were bowled out for 226 with two balls to spare.

Tim Bresnan was the star performer with four wickets, Steven Finn and James Tredwell shared two each whereas Chris Woakes and Samit Patel claimed one wicket each.

England started their innings with Alastair Cook and Ian Bell nicely and gathered 24 runs in the first six overs. Bell was the most aggressive of the two, he was sending the ball out of the ropes frequently and got another 2 fours in the 9th over. The partnership grew to 53 in 11.5 overs when Cook was clean bowled by Ishant Sharma for 22 runs. Kevin Pietersen did not last longer and lost his wicket for just six runs as the youngster, Joe Root, took guards at the pitch. The score board kept moving as Root added 10 runs in the 23rd over with a couple of fours.

Ian Bell reached his fifty five overs later as Root was providing a vital support from his end. Bell hit the first six of the innings in the 34th over and Root was clean bowled by Ravindra Jadeja for 31 runs at 143 in 35.4 overs. Eoin Morgan associated with Bell next who was playing an exciting innings with plenty of boundaries.  The composed batsman, Ian Bell, powered his third ODI hundred with a four and the visitors reached the 200 runs mark in the 45th over. Morgan punished Shami Ahmed for 15 runs with 2 grand sixes in the next over as Bell added 2 fours in the following overs and hit the winning run on the second ball of the 48th over.

Ian Bell remained unbeaten for a majestic 113 off 143 with 1 six and 13 well timed fours, Eoin Morgan secured his end at 40 from even balls with 3 lofty sixes. England hammered 227 runs for the loss of just three wickets with 16 balls to spare.

Shami Ahmed, Ishant Sharma and Ravindra Jadeja were the only successful bowlers with one wicket each.

England won the final One Day International by a huge margin of seven wickets but India clinched the five match series 3-2. 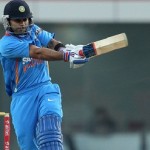 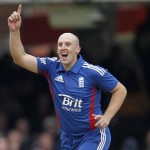 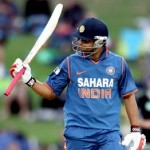