England tuned up in a nice manner playing their last tour match against Haryana as their batsmen and bowlers found a rhythm before the opening Test vs. India.

Earlier, Alastair Cook, the captain of England XI, won the toss, padded up and came into bat with Nick Compton who is a strong candidate to open the innings for his country in the Test series. They started off well against a reasonable bowling of Haryana which comprised all types of bowlers. The duo provided a solid opening stand of 166 runs in 34.1 overs when Cook was dismissed three runs short of his 40th first class ton.

Nick Compton and Jonathan Trott continued consolidating the innings before they were dismissed for 74 and 46 runs respectively as the score was lifted to 247. Kevin Petersen and Ian Bell demonstrated a fine batting and especially the first was severe on the bowlers. Haryana skipper, Amit Mishra, used seven bowlers to dislodge the partnership but was unable to separate them. Petersen played a breezy unbeaten knock of 110 off just 94 balls with 3 mighty sixes and 16 fours before he was retired hurt.

Amit Mishra and Jayant Yadav were the most successful bowlers with four wickets each and Sachin Rana held one.

Haryana lost their first wicket at 28 as Sunny Singh joined in with Rahul Dewan who was having a good time at the wicket. They exhibited positive cricket while facing the devastating bowlers of England XI. The ball touched the fence at regular intervals and the score was enhanced to 125 when Sunny Singh became the second victim for 55.

The middle order batting of the home side collapsed without providing any substantial resistance. Rahul Dewan smashed his 6th first class ton as the wickets kept on sliding from the other side. He remained unbeaten for 143 off 315 with 17 fours as the entire team was bowled out for 334 runs in 112.4 overs.

Tim Bresnan and Stuart Meaker were the top wicket takers with three each, Samit Patel got two whereas Monty Panesar and Kevin Pietersen shared one wicket each.

Jonathan Trott was promoted up in the order to open the innings with Nick Compton and he availed the chance by flourishing the innings. Both openers utilised the chances to the fullest and Haryana bowlers had no answer to their authoritative batting. They shared a mammoth partnership of 162 runs when Nick Compton was gone for 79 off 153 with 10 fours. Trott carried on with his quality batting while getting sufficient support from Ian Bell.

Jonathan Trott thrashed his 30th first class century and was retired hurt for 101 off 183 deliveries with 1 six and 13 fours. Bell scored 48 runs as Haryana picked up few quick wickets.  England XI declared their second innings at 6-254 after gaining a lead of 441 runs.

Haryana did not have a reasonable start in the second innings either and the first wicket was lost at 36 runs. The second wicket was lost at 45 when Sunny Singh got together with the opener Nitin Saini. They added 43 runs when the latter went back to the pavilion for 25 runs. Nitin Saini got his 13th first class fifty and was the fifth victim at 96 after contributing 50 off 84 with 9 fours. Haryana reached 6-133 when the match came to an end on the fourth day.

The third tour match ended in a draw but the visitors had an ample practice both with the bat and with the ball. Their confidence has been boosted up before the start of the first Test against India due to commence from November 15, 2012, at Ahmedabad. 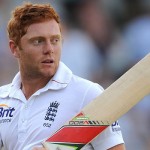 England XI exhibited a perfect show vs. Mumbai A