England XI continued strengthening their armoury in all departments of the game during the side matches while the youngsters of Mumbai A also impressed.

The second warm up match was played between England XI and Mumbai A on November 3, 4 and 5, 2012, at Dr DY Patil Sports Academy, Mumbai.

Stuart Broad won the toss for England XI and opted to go into bat first but lost the first wicket for just five runs. The seasoned batsman Jonathan Trott got together with Joe Root and added 50 runs for the second wicket before losing his wicket for 28 runs. Ian Bell went out cheaply for just four runs and Root became the fourth victim at 66 in 24.5 overs at his personal contribution of 28 runs.

Eoin Morgan and Jonny Bairstow stabilised the innings of the visitors while playing aggressive knocks. The duo punished the rival bowlers at will as the skipper of Mumbai A, Suryakumar Yadav deployed eight bowlers to separate them. The fifth wicket association accumulated a 156 runs partnership and enhanced the score to 222 when Morgan was gone for 76 off 128 balls with 1 six and 8 fours. Jonny Bairstow smashed his 8th first class ton in the process and Samit Patel proved his worth again by providing solid support to his partner.

Bairstow was caught by Shikhar Dhawan on the bowling of Javed Khan for 118 off 177 with 14 fours. Samit Patel scored 60 runs as the innings of England XI was declared for 9-345 in 93 overs.

Kshemal Waingankar and Shardul Thakur were the most successful bowlers with three wickets each, Javed Khan held two and Suryakumar Yadav claimed one wicket.

The openers of Mumbai A were sent back to the dressing room for 47 runs as the promising Cheteshwar Pujara and the young gun Hiken Shah consolidated the innings. The pair demonstrated positive batting and sent the ball out of the fence in all corners of the park with great timings. The flow of runs was unstoppable and the batsmen negotiated all seven bowlers as per merit. The formidable third wicket partnership resulted in 163 runs as Pujara was caught by James Anderson off Monty Panesar for 87 off 184 deliveries with 11 fours.

Hiken Shah was unlucky to miss his third first class ton by eight mere runs and was caught behind by the wicketkeeper Bairstow off Graham Onions for 92 scored on 194 balls with 1 six and 11 fours. The middle and lower order batting could not resist against the rival bowling and the entire team was bowled on 286 runs in 101.4 overs.

Monty Panesar and Samit Patel were the top spinners with three wickets each, Graham Onions got two whereas James Anderson and Joe Root shared one wicket each.

England XI openers gave an opening stand of 38 runs as Joe Root was declared leg before wicket off Thakur for 24 runs. Jonathan Trott and Nick Compton spent some time in the middle and gained valuable batting practice. Yadav struck by clinching the wicket of Trott for 30 runs as Ian Bell joined in with Compton who completed his 28th first class half century. The game was called off as the visitors reached 149 in 52 overs without losing any further wicket. Nick Compton and Ian Bell remained unbeaten on 64 and 28 runs respectively and got tuned for the big games ahead on the tour.

The second tour game of England XI concluded in a draw but their batsmen, bowlers and fielders gained a lot of confidence from the match. A couple of young batsmen and bowlers from Mumbai A came in the limelight with a fine display of their skills in the encounter and they have a bright future ahead of them. 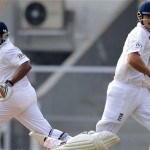 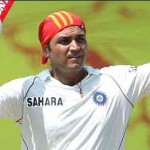