A scintillating fourth wicket match winning partnership of 106 runs between Mohammad Hafeez and Shoaib Malik lifted Pakistan to a gigantic win in the first T20.

India scored 133 runs for the loss of 9 wickets after availing the scheduled 20 overs and Pakistan piled up 134 runs with five wickets in hand with two balls to spare.

Mohammad Hafeez (Pakistan) was declared ‘Player of the match’ for his glorious batting and excellent leadership.

The much awaited clash of the Titans took place in the first Twenty20 which was played on Tuesday, December 25, 2012, at M Chinnaswammy Stadium, Bangalore.

Earlier, Mohammad Hafeez, the captain of Pakistan, won the toss and preferred to bowl first with the threat of dew while bowling second. Gautam Gambhir and Ajinkya Rahane opened the innings carefully for the Blue Shirts as the lanky fast bowler, Mohammad Irfan, made his debut for the Green Shirts. Rahane hit the first four of the innings on the last ball of the third over and added two more in the next couple of overs. Gambhir was unable to send the ball out of the fence in the first six power play overs as India scored 37 runs without losing any wicket.

Umar Gul was introduced into attack in the seventh over which cost him 13 runs with 1 six from Gamhir and 1 four off Rahane. The run rate was picked up by the duo as the latter hit a six in the next over from the master off spinner, Saeed Ajmal. Shahid Afridi faced the same fate and conceived 10 runs in the 9th over as the Men in Blue reached 74 after the half way mark of their innings. Afridi made the first breakthrough when Ajinkya Rahane was caught by Umar Akmal at for 42 off 31 balls with 1 six and 5 fours.

The highest run getter of T20 in 2012, Virat Kohli came in next as a superb throw from Sohail Tanvir ran out Gambhir for 42 off 41 deliveries with 1 six and 2 fours. The second wicket fell at 90 in 12.4 overs as Yuvraj Singh made an impact by dispatching a six on the first ball he faced from Afridi. The first hundred of the Indian innings was displayed on screen in the 14th over as Mohammad Ifran got rid of Virat Kohli when he was caught behind by Kamran Akmal for nine runs.

The visitors came back in the game by grasping the important wickets of the home skipper, MS Dhoni, and Yuvraj Singh for 1 and 10 runs respectively. The Blue Shirts lost eight wickets with the addition of just 47 runs and they were reeling at 8-124 in 18.1 overs. India managed 133 runs with one wicket in hand at the end of the 20 overs.

Umar Gul was the star performer with three wickets, Saeed Ajmal held two whereas Mohammad Irfan and Shahid Afridi shared one wicket each.

Pakistan had a dismal start when they lost their opener Nasir Jamshed for just two runs.  He was clean bowled on the last ball of the first over bowled by the debutant quick bowler, Bhuvneshwar Kumar. Mohammad Hafeez got together with Ahmed Shehzad and they added nine runs in the next over with 2 fours. Bhuvneshwar Kumar destroyed the top order batting of the Green Shirts in his next over when he removed Ahmed Shehzad and Umar Akmal. The visitors were in dire trouble at 3-12 after just three overs as Shoaib Malik walked in the centre and started the repair work along with Mohammad Hafeez.

The pair kept the score board moving and the first fifty of the innings appeared on board in the 11th over. The Green Shirts accumulated 13 runs in the 11th over off Kohli with 2 fours from Mohammad Hafeez. The 50 runs partnership was achieved in the 12th over as Shoaib Malik got the first six of the innings. Both batsmen kept on moving and collected 11 runs in the 14th over with a six from Mohammad Hafeez as Shoaib Malik kept on consolidating from the other end.

Mohammad Hafeez smashed his third T20 fifty with a grand six in the 15th over and hundred of the innings was attained in the next over. The third wicket partnership contributed 106 runs when Mohammad Hafeez was finally caught by Bhuvneshwar Kumar at third man off Ishant Sharma for 61 off 44 balls with 2 huge sixes and 6 fours. Shoaib Malik thrashed his third T20 half century in the 19th over that was scored on 47 balls.

Kamran Akmal was gone for just one run and Pakistan required 10 runs from the last six balls. The target was reduced to six from three as Shoaib Malik lifted Ravindra Jadeja for a straight six sailing over his head and won the match for his country. The Green Shirts hammered 135 runs for the loss of just five wickets in 19.4 overs as Shoaib Malik remained unbeaten for 57 off 50 deliveries with 3 lofty sixes and even fours.

Bhuvneshwar Kumar became the best T20 bowler to grab 3-9 on a debut as Ashok Dinda and Ishant Sharma claimed one wicket each.

Pakistan became victorious with a big margin of five wickets which was their first win in T20 against India and they lead the two match series at 1-1. The second T20 of the series will be played on December 28, 2012, at Sardar Patel Stadium, Motera, Ahmedabad. 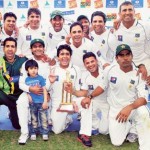