Rajasthan Royals suffered a blow as their position in the top four teams jeopardized by losing the crucial match of the IPL vs. The bottom liner Deccan Chargers.

Rajasthan Royals scored 126 runs for the loss of 8 wickets in the measured 20 overs and Deccan Chargers achieved the target by smashing 128 with five wickets in hand in 18.4 hours.

Dale Steyn (Deccan Chargers) was declared ‘Player of the match’ for his economical bowling spell of 2-16 in four overs.

The 68th encounter of the Indian Premier League 2012 was held at Rajiv Gandhi International Stadium, Uppal, Hyderabad, on Friday, May 18, 2012.

Earlier, the captain of Rajasthan Royals, Rahul Dravid, won the toss, preferred to bat and the decision bounced back as they lost their first wicket for eight runs. Shane Watson joined in with Dravid, they enhance the scoring and got a boundary in almost each over. The fifth over produced 12 runs with one six and a four followed by a couple of fours by Dravid in the next over.

The score was taken to 41 as Watson was clean bowled by Amit Mishra for 13 and Stuart Binny faced the same fate 13 runs later. Owais Shah took guards in the centre next and added 19 runs for the fourth wicket when Dravid was caught by Chris Lynn off Manpreet Gony for 39 from 36 deliveries with 5 fours.

Ashok Maneria and Shah exhibited some resistance by accumulating 35 runs together as Menaria lost his wicket for 20. The lower order batsmen surrendered against the calculated bowling of Deccan Chargers and Shah became the eighth casualty once he was run out on the last ball of the innings for 28. Rajasthan Royal batsmen were unable to impress and managed 126 runs when the last ball of the scheduled overs was bowled.

Dale Steyn, Pratap Singh and Amit Mishra were the most successful bowlers with two wickets each as Manpreet Gony claimed one.

Akshath Reddy and Shikhar Dhawan provided an excellent start to Deccan Chargers as the latter earned 10 runs in the first over with one six and a four. The score board kept on flowing as Reddy hit 13 runs in the sixth over which comprised one six and a four. The solid association between the openers resulted in 58 runs at the end of the sixth over and they were capitalising well when the first wicket was lost at 63 in 8.3 overs. Dhawan was the first batsman who went back to the pavilion for 26 off 24 balls with 2 sixes and even fours as Jean-Paul-Duminy walked in the centre.

The duo added 20 runs in the total when Akshath Reddy was caught by Owais Shah off Siddharth Trivedi for 42 off 35 balls with 1 six and 4 fours. Duminy took command from thereon with a little contribution from the other end as the wickets kept on sliding. He became the fifth victim at 118 runs after his personal contribution of 24 as Parthiv Patel and Ashish Reddy saw their team through to the target. Deccan Chargers thrashed 128 runs for the loss of five wickets with eight balls to spare as both remained unbeaten on 10 runs.

Siddharth Trivedi was the top wicket taker with two whereas Aajit Chandila, Johan Botha and Stuart Binny held one wicket each.

Rajasthan Royals lost the important game and almost lost the place in the top four teams of the tournament.

Points achieved by both teams at the end of the 68th match of the IPL 2012: 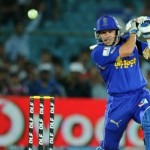 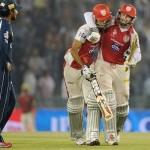 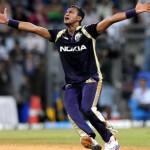