Gautam Gambhir, Kolkata Knight Riders’ captain, was annoyed with the prosecution of the middle order batsmen vs. Kings XI Punjab which was lost by just two runs.

They played the 17th match of the Indian Premier League 2012 against Kings XI Punjab on April 15, 2012 at the famous Eden Gardens, Kolkata in front of their home crowd who were depressed by the performance of their team in the match.

The pitch was analysed by Gautam Gambhir before the start of the match and he put in the Kings XI Punjab in to bat instantly after winning the toss. His bowlers provided the required start by clinching two early wickets for just 21 runs in 4.2 overs and the rival team never recovered after that. Mandeep Singh and David Hussey were the only two batsmen who exhibited some resistance on the top order. Mandeep scored 38 runs off 34 balls with the help of one six and three fours whereas Hussey played a patience knock of 32 from 31 balls with just one six and a four.

Six of their batsmen were unable to enter the double figures and three of them were restricted to the scores under 20. Kings XI Punjab managed 134 runs for the loss of nine wickets at the end of the metered 20 overs which was not a big ask from the formidable batting line up of the home side.

The right off spinner, Sunil Narine demonstrated a destructive spell of bowling by grabbing five important wickets for mere 19 runs in his allocated  four overs and was rightly declared ‘Player of the match’. Rajat Bhatia got two wickets for just 14 runs and Shakib Al Hasan chipped in with one wicket. Gambhir hailed his bowlers for restricting Kings XI Punjab as the target of 135 was very much achievable. He said,

“It was a fantastic effort by the bowlers, and I couldn’t have asked for more. If you can’t chase down 135, you don’t deserve to win. The result didn’t go in our favour, but I can’t say it was a poor day. We played well in patches.”

Kolkata Knight Riders lost their first wicket for 13 runs as Gambhir scored 22 off 13 deliveries with 4 fours. Manvinder Bisla was going well but lost his wicket for 27 whereas Manoj Tiwari lost his wicket for 20 runs. They were very much in sight of the victory even after losing four top wickets for 79 in 12.1 overs when Shakib Al Hasan and Yusuf Pathan went back to the pavilion in quick succession by scoring 4 and 0 respectively.

Debabrata Das took the challenge in the lower order and fought well and remained unbeaten for 35 off 23 balls with one six and three fours as the wickets kept on falling from the other end. They required 13 runs from the last 12 balls with four wickets in hand but surrendered two runs earlier as another wicket was lost in the last over.

Gautam Gambhir was unhappy with the form of his middle order batsmen who cost them the easy encounter and warned them to start taking responsibility otherwise they can suffer. He further commented,

“I’m not happy with the form of the middle order. There are some experienced players who need to start taking responsibility. Otherwise strong decisions need to be taken. I feel this was a very good wicket to bat on, as the ball was coming nicely on the bat. I’m not happy with our performance, and we should have chased it down easily.”

The middle order of Kolkata Knight Riders has not produced the required result in the fifth edition of the IPL which is a cause of concern for Gautam Gambhir as they have lost three out of their five matches mainly because of their own self-destruction. The skipper has asked them to be more positive in their approach which can put them on top again. 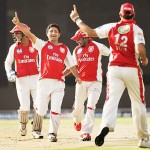 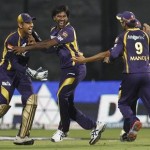