Mumbai Indians became victorious against Deccan Chargers on the bowler’s day when the batsmen from both sides struggled as Lasith Malinga grabbed four wickets.

Deccan Chargers scored just 100 runs before they were bowled out in 18.4 overs and Mumbai Indians met the target by accumulating 101 with five wickets in hand and 11 balls to spare.

Dale Steyn (Deccan Chargers) was declared ‘Player of the match’ for his economical spell of 2-10 runs in four overs.

Earlier, Mumbai Indians captain, Harbhajan Singh, won the toss and sent Deccan Chargers in to bat knowingly that the wicket will assist the bowlers. Parthiv Patel and Shikhar Dhawan opened the innings as surprisingly Harbhajan bowled the first over and gave away three runs. Patel opted for attack and gathered nine runs in the second over with a six followed by seven runs in the next over with a four. Dhawan joined in the race by opening his account in the fourth over and took his score to 15 with a couple of fours by the end of the fifth over.

Patel became the first victim when he was caught by Munaf Patel off RP Singh for 19 with one six and a four after contributing 37 runs for the first wicket in 5.3 overs. The batsmen found it hard to stay at the wicket as Harbhajan chipped in with a couple of quick wickets and Dhawan was the fourth batsman who went back to the pavilion for 29 off 32 balls with 3 fours.

Deccan Chargers were in deep trouble after losing four wickets for just 59 runs in 11.1 overs as Jean-Paul- Duminy secured one end but was unable to find someone who could have stuck to the task from the other side. He kept on crawling until the end and scored unbeaten 25 runs from 24 balls with 3 fours as the wickets fell like nine pins at the other end. Ashish Reddy contributed 10 runs in the lower order as no other batsman was able to get into the double figures and the innings of Deccan Chargers was folded back at 100 runs with eight balls to spare.

Lasith Malinga was the star of the day with ball and grabbed four wickets, Harbhajan Singh and James Franklin held two victims each as RP Singh and Munaf Patel shared one wicket each.

Dale steyn uprooted the stumps of Richard Levi on the very first ball of the innings when Rohit Sharma walked in and joined with Sachin Tendulkar. Sharma dispatched a couple of fours in the fourth over and Tendulkar followed him with a four in the next over and the score crept to 27 after 30 balls. Tendulkar was caught in the slip by Daniel Christian off Pratap Singh for 14 on the fifth ball of the sixth over.

Sharma kept on cruising as the wickets were falling constantly from the other end and the first fifty of the innings was scored in the 10th over. Sharma was the fourth batsman who went back to the pavilion after demonstrating a patience knock of 42 runs off 48 balls with one six and 4 fours. Ambati Rayudu played a responsible innings in the middle order and remained unbeaten for 19 from 15 balls with 2 fours as Mumbai Indians achieved the target by scoring 101 runs in 18.1 overs.

Dale Steyn was the highest wicket taker with two whereas Pratap Singh, Ashish Reddy and Duminy claimed one wicket each.

Points secured by both teams after the end of the 40th match of the Indian Premier League 2012: 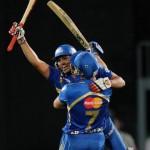 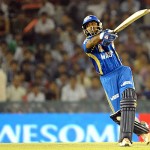 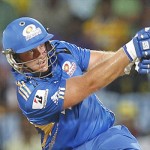