The strong batting line of Royal Challengers Bangalore crumbled against the devastating bowling of Mumbai Indians who became triumphant at their home ground.

Mumbai Indians piled up 194 runs after losing seven wickets in the allotted 20 overs and Royal Challengers Bangalore reached 136 with three wickets in hand after the required quota of overs was consumed.

Dwayne Smith (Mumbai Indians) was announced ‘Player of the match’ for his all round performance in the game.

The 37th match of the Indian Premier League was played on Saturday, April 27, 2013, at Wankhede Stadium, Mumbai.

Earlier, the skipper of Mumbai Indians, Rohit Sharma, won the toss and utilised the chance to bat first. Dwayne Smith along with Sachin Tendulkar walked in to open the innings and the latter began in a grand style by hitting 4 fours in the second over off Ravi Pampaul. The little master was declared leg before wicket off RP Singh for 23 in the next over as Dinesh Karthik got together with Smith who added 10 runs in the sixth over with 2 fours. Karthik hit the first six of the day two overs later and Smith punished Vinay Kumar for 16 in the following over with a couple of sixes and one four.

Dwayne Smith powered his half century on 35 mere balls and was clean bowled on exactly 50 runs off 36 balls with 3 mighty sixes and 4 fours. Rohit Sharma was run out for 10 runs as Kieron Pollard took guards next as Karthik kept on enhancing the score at his end. Pollard dispatched 17 runs in the 15th over with 2 sixes as the score crossed the 150 runs mark in the 16th over. Pollard went after RP Singh by scoring another 15 runs in the next over as Dinesh Karthik ran himself out for 43 off 33 with 1 six and 3 fours. Kieron Pollard was gone for 34 off just 16 deliveries with 3 huge sixes and 2 fours as Mumbai Indians smashed 194 with three wickets remaining in 20 overs.

Ravi Rampaul, RP Singh, Vinay Kumar and Syed Mohammad were the only successful bowlers with one wicket each.

Chris Gayle and Tillakaratne Dilshan started off reasonably well by scoring 25 runs in the first four overs. Gayle got 2 fours in the next over and the score was taken to 35 as Dilshan became the first victim of Dhawal Kulkarni for 13. Chris Gayle was caught by Ambati Rayudu off Harbhajan Singh for 18 as Kulkarni got rid of the next two batsmen cheaply. Virat Kohli and AB de Villiers were caught behind by Dinesh Karthik for 1 and 2 runs respectively and the visitors were reeling at 4-43 in 7.4 overs.

Saurabh Tiwary and Arun Karthik tried to accumulate a few runs but took the total to 67 as the latter was stumped smartly by Karthik off Harbhajan Singh for 12 and Tiwary became the next victim after the addition of 16 runs to the total for 21. Royal Challengers Bangalore were seven wickets down for 85 in 13.5 overs as Ravi Rampaul and Vinay Kumar associated in the park and they were sending the ball out of the fence at regular intervals. Rampaul was at the crease for 23 and Vinay Kumar was at the other side for 26 as their team scored 136 runs for the loss of seven wickets in 20 overs.

Dhawal Kulkarni was the star performer with three wickets whereas Harbhajan Singh and Dwayne Smith shared one wicket each.

Mumbai Indians clinched the match comfortably by a prominent margin of 58 runs and have occupied the fourth spot with 10 points. 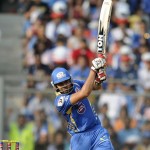 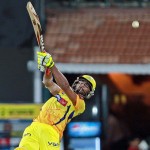