The star bowler in the IPL 2012, Sunil Narine, of Kolkata Knight Riders threatened the rest of the teams in the tournament again by destroying the Delhi Daredevils.

Delhi Daredevils were bowled out for 128 runs in the required 20 overs and Kolkata Knight Riders smashed 129 for the loss of just four wickets and eight balls to spare.

Sunil Narine (Kolkata Knight Riders) was declared ‘Player of the match’ for his excellent bowling figures of 4-13 in the match.

The inaugural match of the Indian Premier League was played on Wednesday, April 3, 2013, at Eden Gardens, Kolkata, and that was witnessed by a capacity crowd.

Earlier, Gautam Gambhir, the skipper of Kolkata Knight Riders, won the toss and asked Delhi Daredevils to bat first. The decision paid dividends as the stumps of Unmukt Chand were shattered by Brett Lee on the very first ball of the innings and the captain of Delhi Daredevils, Mahela Jayawardene, joined in with David Warner. The duo found it easy to score the boundaries, they reached 26 after three overs and the latter hit a couple of fours in the next over. The score was taken to 44 in 5.5 overs when Warner became the first victim of Sunil Narine for 21 off 19 balls with 4 fours.

The Kolkata Knight Riders bowlers became unplayable and Jayawardene was the only notable batsman who faced the rival attack bravely as the wickets kept on crumbling from the other end. Delhi Daredevils were reeling at 6- 98 after 16 overs as Mahela Jayawardene attained his fifty in the following over with 2 fours. He was the 8th batsman who went back to the dressing room after scoring 66 from just 52 deliveries with 1 six and 8 fours as the innings of the entire Delhi Daredevils was folded back for 128 runs on the last ball of the innings.

Sunil Narine was the main destructor with four wickets, Brett Lee and Rajat Bhatia shared two each whereas Lakshmipathy Balaji claimed one wicket.

Kolkata Knight Riders lost their first wicket cheaply at five when Manvinder Bisla was gone for just four runs as Jacques Kallis got together with Gautam Gambhir. The pair opted to attack and added 15 runs in the third over with 1 six and 2 fours followed by another 2 boundaries from each batsman in the next two overs. The score went past the 50 runs mark in the seventh over as Kallis was caught by Chand at midwicket off Shahbaz Nadeem for 23. Manoj Tiwari walked in next and opened his account with a four and the tempo was carried on by Gambhir at the other side.

The score ascended to 93 in 13 overs when Gambhir was declared leg before wicket for 42 off 29 mere balls with 1 six and 5 fours. Tiwary followed him six runs later for 23 as Eoin Morgan scored 14 while Yusuf Pathan posted 18 and they accumulated 30 runs for the fifth wicket. The two batsmen remained unbeaten as the target was achieved by powering 129 runs in 18.4 overs.

Shahbaz Nadeem was the highest wicket taker with two whereas Ashish Nehra and Johan Botha ended up with one wicket each. 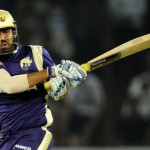 The No.1 Delhi Daredevils slipped as Kolkata Knight Riders jumped into the final 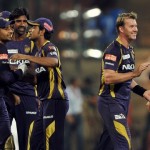