The third day’s play came to an end on Sunday, February 16, 2014, at Basin Reserve, Wellington.

Earlier, the home side went into bat at 1-24 in 9 overs whereas Hamish Rutherfiord and Kane Williamson were at the crease for 18 and 4. The latter departed early for seven as Tom Latham tried to consolidate the innings with his partner. The score was taken to 52 when Rutherford was gone for 35 and was replaced by his skipper, Brendon McCullum, who was dropped by Virat Kohli off Mohammed Shami at 9.

Latham became the next victim at 87 after scoring 29 and Corey Anderson was caught and bowled by Ravindra Jadeja for just two runs. The hosts were in misery after losing their fifth wicket at 94 when BJ Watling joined in with McCullum. The run rate was kept under check by the tourists and the latter was dropped again at 36 by Ishant Sharma off his own bowling. Brendon McCullum utilised the chances and reached his fifty in the 68th over whereas Watling went past his 1000 Test runs three overs later.

The duo was fighting bravely and the second hundred of the innings was displayed on board with a boundary from McCullum. The skipper smashed his 9th Test century with style by hitting a grand six over long-on at the bowling of Sharma. It was the consecutive Test ton for Brendon McCullum who crossed his 5000 Test runs in the process. BJ Watling got his seventh Test half century and remained unbeaten for 52 at the close of the play. McCullum secured his end with 114 off 237 balls with 1 six and 14 fours as the Black Caps scored 5-252 in 99 overs.

Zaheer Khan was the main wicket taker with three whereas Mohammed Shami and Ravindra Jadeja claimed one each.

New Zealand has taken a minor lead of six runs and they have to add a minimum of 200 runs to save the match otherwise India is a strong contender for the victory. 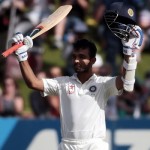 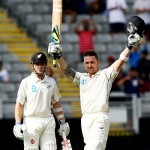 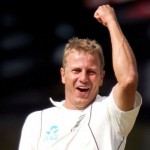