Rob Nicol plundered 146 runs while opening the innings, well supported by Martin Guptill’s 77 at the other end enabled New Zealand an easy 141 runs victory in the consecutive One Day International against Zimbabwe.

The Kiwis thrashed 372 runs after losing six wickets and the visitors managed 231for the loss of eight wickets in the allocated 50 overs.

Nicol was honoured with the ‘Player of the match’ award for his attacking innings on the top.

Earlier Zimbabwe Captain, Brendan Taylor won with the coin and sent the rival team into bat first. New Zealand openers started off cautiously and the initial two overs ended as maiden. The innings was steadied later on as both openers started playing their shots. Guptill opened his arms by dispatching a six and four in the ninth over and Nicol followed him in the 16th over.

The onslaught was continued and hundred of the innings was completed in the 18th over as both openers had posted their fifties by the end of the 22nd over. They contributed 131 runs for the first wicket as Guptill was gone after scoring 77 runs off 80 balls which included two sixes and eight fours.

Jacob Oram was promoted up in the batting order and the batting power play was taken immediately. The move paid off immediately as Oram took the charge by collecting 13 runs in the 28th and 29th over consecutively. He continued with the tempo and achieved his fifty on just 23 balls with three skied sixes and five fours. The all rounder lost his for 59 runs as the total cruised to 208 runs in 32.4 overs.

Nicol continued with his aggression at the other end and completed his century in the 43rd over. The run rate was escalated with the arrival of Tom Latham at the crease and Nicol was the fifth batsman to go back to the pavilion after a majestic knock of 146 runs off 134 balls which comprised six towering sixes and 10 fours. Latham played a hurried innings of 48 off 28 balls with two sixes and five fours as the home side smashed 372 runs for the loss of six wickets in 50 overs.

Prosper Utseya was the highest wicket taker with three as Shingi Masakadza, Ray Price and Hamilton Masakadza shared one wicket each.

Zimbabwe initiated their innings in a horrible fashion as they lost their four top order batsmen for mere 35 runs on board in 13.3 overs as the speed merchants of New Zealand were unplayable.

The fifth wicket was lost after the addition of 27 runs when the experienced duo of Tatenda Taibu and Elton Chigumbura halted the ambush with determination. They added useful 80 runs for the sixth wicket when Taibu lost his wicket after scoring 50 off 76 balls with just one four.

The sixth wicket was gone at 142 runs and with the addition of 25 runs in the total, Chigumbura was clean bowled by Oram for 63 runs with one six and seven fours. Utseya and Shingi shared a 64 runs partnership for the eighth wicket which was not enough to win the match.

Zimbabwe scored 231 runs after losing eight wickets when they consumed the required quota of fifty overs.
The Black Caps won the match by a huge margin of 141 runs and are leading the three match series 2-0. 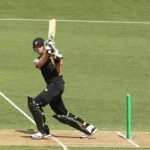