New Zealand was fighting hard for survival in the first Test against South Africa and needed another 264 to clinch the match with two wickets down.

The first Test at University Oval, Dunedon on March 10, 2012 has entered an interesting stage as Smith declared their second innings for 435 and grabbed two early wickets of the hosts for 137 runs.

Earlier, the Proteas resumed their second innings on the fourth day at 268 in 89 overs after losing just three wickets, Kallis and Rudolph were unbeaten on 107 and 13 runs respectively. The home side had an early breakthrough when Kallis was gone for 113 runs after the addition of 15 runs in the total.

AB de Villiers came in next and joined with the smooth going Rudolph who was accelerating at the other end. The duo kept on capitalising, the runs were being accumulated at a reasonable speed and the later completed his fifty by dispatching consecutive boundaries in the 115th over. They shared a partnership of 70 runs for the fifth wicket as de Villiers was caught at deep mid wicket by Brendon McCullum off Kane Williamson for 29 runs.

The fifth wicket was lost at 353 runs as Mark Boucher came in the centre and provided good support to Rudolph. The later opted for attack and continued with the onslaught as the bowling looked like ordinary.

Jacques Rudolph became the third century maker in the second innings while sending the fifth ball of the 138th over reeling out of the fence. He remained unbeaten for 105 off 182 balls with one six and 15 fours as Boucher was at the crease on 34 when Smith declared the second innings at 435 after losing five wickets.

Bracewell was the highest wicket taker with three as Trent Boult and Kane Williamson shared one wicket each.

The Black Caps were given a tough task of 401 runs to win the match as Rob Nicol and Martin Guptill started off the proceeding.  They faced the initial shock when Guptill was caught smartly by AB de Villiers for just six runs as the scoreboard reached 16.

Nicol and Brendon McCullum tried to consolidate by adding 39 runs in the total as the first was caught by Graeme Smith at mid-on for 19 runs. The home side was in trouble as the skipper Ross Taylor took the guards and steadied the ship with McCullum. The later was aggressive off the two and achieved his fifty in the 32nd over by stealing a single by sending the ball towards third man.

McCullum and Taylor were unbeaten for 58 and 48 runs respectively as the Kiwis scored 137 runs with eight second innings wickets in hand. They will create history if they can win the match as the previous best record was 324 runs against Pakistan in 1994.

Everything is possible in cricket but their two batsmen at the crease followed by their middle and late order have to perform well on the fifth day against the lethal attack of South Africa. 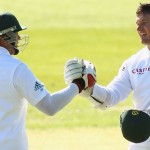 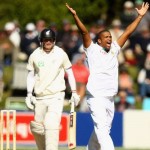 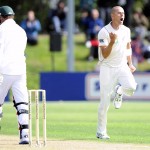