The debutants, Bilawal Bhatti along with Anwar Ali, lifted the visiting Green Caps in batting, bowling and won the opening match vs. South Africa.

Pakistan scored 218 for the loss of nine wickets in 50 overs and the Proteas was bowled out for 195 with 11 balls remaining.

Anwar Ali (Pakistan) was declared ‘Player of the match’ for his excellent all round performance.

The first One Day International of the three match series was played on Sunday, November 24, 2013, at Newlands, Cape Town.

Earlier, Misbah-ul-Haq won the toss elected to bat first on a nice looking strip. Nasir Jamshed and Ahmed Shehzad opened the innings cautiously while scoring 49 runs in 15.2 overs. The first was gone for 24 and the next batsman, Mohammad Hafeez was dismissed for just five. Ahmed Shehzad became the next victim at 73 after scoring 35 as the rival bowlers got hold of the game in the coming overs. The wickets started falling at regular intervals and the Green Caps were reeling at 7-131 in 35.5 overs.

Anwar Ali and Bilawal Bhatti got together in the center and shared a brave partnership of 74 runs. Bilawal Bhatti surrendered his wicket for 39 off just 25 balls with 2 lofty sixes and 3 fours. Anwar Ali remained unbeaten for 43 off 55 comprising 6 fours as the visitors reached 9-218 in the required overs.

Dale Steyn and Morne Morkel were the top wicket takers with three each, Jacques Kallis got two whereas Vernon Philander held one wicket.

South Africa lost their openers for just 20 as Quinton de Kock and Jacques Kallis took the score to 62. The first was clean bowled by Bilwal Bhatti for 19 and the stumps of AB de Villiers were uprooted by Shahid Afridi for 10. Kallis kept on cruising, attained his 86th ODI fifty and was the fifth batsman who returned to the pavilion for 50. Jean-Paul Duminy was the only other batsman who resisted by scoring 49 as the innings of the entire home side was folded back for 195 in 48.1 overs.

Bilawal Bhatti was the highest wicket taker with three, Anwar Ali and Saeed Ajmal shared two each whereas Junaid Khan, Mohammad Hafeez and Shahid Afridi chipped in with one wicket each.

Pakistan grabbed the encounter with a margin of 23 runs and leads the series 1-0. 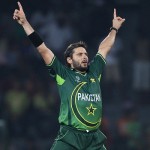 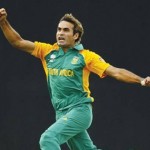 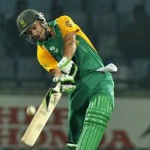