Australia has announced its squad for the first Test against England under the captaincy of Michael Clarke and George Bailey will most probably get a Test cap.

England is currently visiting Australia and will play five Tests during their trip. The visitors crushed the hosts 3-0 on their tour to England earlier this year and will be anticipating a revenge on their home grounds. The left arm express bowler, Mitchell Johnson, has made a comeback and the all-rounder James Faulkner has cemented his place whereas George Bailey will most likely earn a Test cap.

Below, we will highlight the careers of James Faulkner and George Bailey.

The 23-year-old is a talented player who has been a great success in the first class cricket. He can move the ball both ways with speed and can surprise the rival batsmen with slow deliveries. The additional batting skills make him different from the other bowlers and he can make brisk runs according to the situation.

The national selector, John Inverarity, is convinced that Faulkner will impress with his all-round performance in the forthcoming series against England. Inverarity said,

“He has been a cricketer we’ve had our eye on for a long time. He impresses us with his batting and with his bowling and with his attitude, and his uncanny ability to have an impact on almost every game he plays. If you give him the ball, he always seems to be able to conjure up a wicket, when he goes out to bat he has the knack of forming a partnership … we have high hopes for him.”

George Bailey was born on September 7, 1982, in Launceston, Tasmania, a right hand batsman and an occasional right arm medium fast bowler. He has played for Australia, Tasmania, Chennai Super Kings, Scotland, Melbourne Stars and Australia A. He is a supreme middle order batsman who has scored heaps of runs in First-class and has been knocking the doors of Test cricket since long.

The 31-year-old has appeared in 97 First-class matches, smashed 6011 runs at an average of 38.28, the best of unbeaten 160 with 14 hundreds and 30 fifties. He has led the Kangroos in the shorter versions of the game with great success.

Bailey was the highest run getter for Australia during their recently concluded seven One Day Internationals away series against India. He powered 478 runs at an excellent average of 95.60, the best of 156 with 1 century and 3 fifties.

John Inverarity, is convinced that George Bailey deserves a Test spot after his outstanding form in the ODIs against India. He praised the batsman by saying,

“George Bailey has been in fantastic form with the bat. His confidence is riding high. His performance in international one-day cricket has been quite extraordinary and he’s very deserving of his opportunity.”

The opening Test of the five match series will commence from November 21, 2013, at Brisbane Cricket Ground, Woolloongabba, Brisbane. 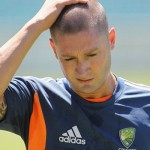 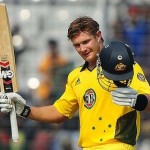 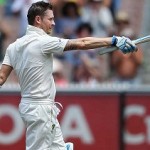