A heroic unbeaten century by Kane Williamson, supported by an excellent ground fielding which resulted in five run outs, threw away the Proteas in the 2nd ODI.

It was the first time that the Black Caps won a series against the hosts in South Africa. They defeated the Proteas in the first One Day International by one wicket on January 19, 2013, at Boland Park, Paarl.

The Kiwis hammered 279 runs for the loss of 8 wickets in their allotted quota of 50 overs and the Proteas were bowled out for 252 with five balls to spare.

Kane Williamson (New Zealand) was declared ‘Player of the match’ for his aggressive knock of 145 off 136 deliveries.

The second ODI of the three match series was played on Tuesday, January 22, 2013, at De Beers Diamond Oval, Kimberley.

Earlier, Faf du Plessis, the skipper of South Africa, won the toss and sent New Zealand in to bat first. The decision paid dividends when Martin Guptill was gone without a run on board as Kane Williamson joined in with BJ Watling. The batsmen decided to secure their wickets against the calculated bowling of the hosts and reached 31 after 12 overs. Watling was declared leg before wicket off Morne Morkel for 12 and was replaced by Grant Elliott who opened his account with a four.

Williamson hit 3 fours in the 13th over, another two in the 17th and completed his fifty in the 21st over. Elliott kept on cruising from the other end as the first hundred of the innings appeared on board three overs later with another 2 fours from Williamson. The duo took the score to 159 in 33.5 overs when Grat Elliott was caught behind by Quinton de Kock off Rory Kleinveldt for 48 runs.

Kane Williamson took over as the wickets kept on tumbling from the other end at regular intervals. He punched his third ODI ton in the 35th over and remained unbeaten for 145 off 136 balls with 1 six and 17 fours. The Black Caps thrashed 279 runs with one wicket still in hand at the end of the 50th over.

Morne Morkel was the chief wicket taker with three whereas Rory Kleinveldt and Lonwabo Tsotsobe shared two wickets each.

Quinton de Kock and Graeme Smith started off slowly for the home side and collected just 11 runs in the first five overs. Quinton de Kock speeded up the run rate by dispatching a six in the next over followed by 11 runs in the 8th over with 1 six and 1 four. He became the first victim after scoring 25 as the score touched 38 and Colin Ingram walked in the park next. Smith was rather slow whereas Ingram was picking up the runs at will and hit 4 fours in his first 24 runs. Smith got a couple of fours in the 18th over and the first hundred of the Proteas innings was displayed on board after 20 overs.

Graeme Smith attained his 47th ODI half century with a four three overs later and Ingram followed him with his fifty in the 26th over. The pair was marching towards the target perfectly when Graeme Smith was unluckily run out for 66 off 75 balls with 8 fours at the total of 167. The Proteas faced another setback as the next batsman, Faf du Plessis, was run out as well after the addition of just seven runs to the score. The debutant Farhaan Behardien got together with Ingram who was caught by BJ Watling off Nathan McCullum for 79 from 94 deliveries with 10 fours.

The hosts were still in control of the game at 4-180 as David Miller and Behardien tried to get hold of the situation. They kept the score board ticking as Miller became the third run out victim for 14 and the tourists captured the game with their superb bowling and fielding. Farhaan Behardien was the fifth batsman who was run out after scoring 31 runs and the entire home team was sent back to the pavilion for 252 in 49.1 overs.

Kayle Mills was the top wicket taker with two whereas Nathan McCullum, James Franklin and Jimmy Neesham claimed one wicket each.

New Zealand won the match by 27 runs quite convincingly in the end and leads the three ODI series 2-0. The third and final game of the series will be played on January 25, 2013, at Senwes Park, Potchefstroom. 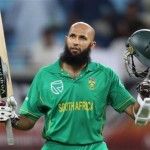 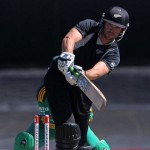