Tamim Iqbal blasted the Netherlands bowling while opening the innings and the skipper, Mushfiqur Rahim, led from the front as Bangladesh won the 1st T20 easily.

The Netherlands scored 144 runs for the loss of seven wickets in the metered 20 overs as Bangladesh smashed 145 runs with eight wickets in hand and 12 balls to spare.

The first Twenty20 of the two match series was played on Wednesday, July 25, 2012, at Sportpark Westvliet, The Hague.

Earlier, Peter Borren, the captain of the Netherlands won the toss and elected to bat. The decision bounced back since they lost three quick wickets for just 14 runs in 3.2 overs as the Bengal Tigers struck early in the innings. The opener, Wesley Barresi was gone without scoring whereas Tom Cooper and Eric Szwarczynski scored one run each.

Peter Borren joined in with the other opener, Michael Swart, and started the repair work. Swart collected 11 runs in the sixth over with one six and one four and the duo added 14 in the next over with a couple of fours. The second wicket partnership contributed 38 runs in 4.3 overs when Peter Borren was run out for 12 runs.

Tom de Grooth came in next, associated with Swart and the flow of runs was maintained . Michael Swart dispatched his fifty on the third ball of the 12th over with a six over long-on and the score was taken to 94 in 13 overs. Grooth became the next victim after scoring 22 runs and eight runs later Michael Swart was caught at deep midwicket for 57 off 41 balls with 2 huge sixes and 4 fours.

The 20th over was the most productive one and resulted in 17 runs with 1 six and 2 fours. Tim Gruijters and Pieter Seelaar remained unbeaten for 21 and 9 runs respectively as the Netherlands managed 144 runs at the end of the 20th over.

Mashrafe Mortaza and Shakib Al Hasan shared two wickets each whereas Abdur Razzak and Mahmudullah claimed one wicket each.

Shakib Al Hasan lost his wicket for 12 once the total reached 63 as Mushfiqur Rahim came in the centre. He secured his end while keeping the required run rate under check as Tamim Iqbal punished Pieter Seelaar in the 14th over for 16 runs comprising 2 sixes and 1 four. Tamim achieved his fifty in the 15th over as the runs kept on flowing from the willows of both batsmen.

The target was achieved in the 18th over by plundering 145 runs as Mushfiqur Rahim lofted two sixes. Tamim Iqbal was at the crease with 69 off 53 balls with 2 sixes and 5 fours whereas Mushfiqur Rahim was at the other end with 37 runs off 24 deliveries assisted with 4 giant sixes.

Timm van der Gugten and Ahsan Jamil were the only successful bowlers with one wicket each.

Bangladesh won the first T20 comfortably by eight wickets and leads the two match series 1-0. The second and final match will be played on Thursday, July 26, 2012, at the same venue. 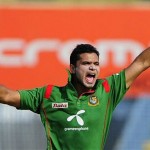 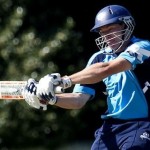 Richie Berrington powered Scotland to an elegant victory over Bangladesh 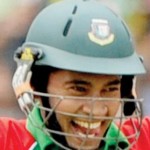