A stunning hundred by Shane Watson, followed by a calculated bowling led by James Faulkner enabled Australia to a commanding victory against West Indies.

Australia piled up 329 runs for the loss of seven wickets in the measured 50 overs. Bravo brothers fought well for West Indies but the innings of the visitors came to an end at 290 in 47.3 overs.

Shane Watson (Australia) was declared ‘Player of the match’ for his majestic innings of 122 off 111 balls.

The third One Day International of the five match series was played on Wednesday, February 6, 2013, at Manuka Oval, Canberra.

Earlier, Michael Clarke, the captain of Australia, won the toss and elected to bat first. The innings was opened by Shane Watson and Aaron Finch nicely and they got 20 runs in the first five overs. That was followed by 3 fours in the next over and they forced the score to 88 after 15 overs. Watson attained his fifty on the second ball of the next over as Finch became the first victim on the following ball for 38. Phillip Hughes joined in next with Watson and the tempo of scoring was contained by the Windies.

Hughes was dropped by Darren Sammy, the skipper of West Indies, at six off Sunil Narine on the fifth ball of the 23rd over at the total of 116. The run rate picked up again after the 25th over and the boundaries started flowing from the willows of the batsmen again. Shane Watson smashed his seventh ODI century in the 32nd over and hit 2 sixes along with 1 four in the next couple of overs. He was finally caught by Kieron Pollard off Kemar Roach for 122 from just 111 balls with 2 sixes and 12 fours.

The second wicket fell at 201 in 33.5 overs as Michael Clarke took guards in the center. Phillip Hughes scored his first ODI fifty in the 38th over besides having two tons in that version of the game already. Clarke was gone next for 15 and was replaced by George Bailey who opted for attack. Hughes kept on playing his shots and was caught behind by the wicketkeeper Devon Thomas off Sammy for 86 scored on 93 deliveries with 1 six and 10 fours. George Bailey played a hurried knock of 44 off 22 balls with 1 six and 6 fours as the hosts hammered 329 runs in 50 overs with three wickets in hand.

Darren Sammy and Sunil Narine were the top wicket takers with two each whereas Kemar Roach, Dwayne Bravo and Kieron Pollard shared one wicket each.

West Indies started off with the new pair of Kieran Powell and Devon Thomas in a slow manner as they scored just one run off the first three overs. Powell hit 5 fours in the next three overs and Thomas shared one as well. They tried to keep up with the required run rate and the ball was visiting the boundary regularly. The first wicket stand was broken at 54 in 8.4 overs when Thomas was caught by Phillip Hughes at cover off Clint McKay for 19 runs. Darren Bravo walked in next and got together with Powell who lost his wicket for 47 off 49 balls with 6 fours as the score touched 81 from 16.4 overs.

Dwayne Bravo associated next with his younger brother, Darren Bravo, and the first hundred of the innings was posted on board in the 20th over. The duo added 15 runs in the 26th over off Mitchell Johnson with 3 fours as Darren Bravo accomplished his eighth ODI fifty two overs later as Dwayne Bravo added another 2 fours in the 32nd over. Dwayne Bravo reached his eighth ODI half century in the next over and the score was lifted to 195 when he was clean bowled by Mitchell Starc for 51 off 50 deliveries with 5 fours. The poor form of Chris Gayle continued when his stumps were uprooted by James Faulkner for just two runs.

The problems for the visitors were multiplied as Darren Bravo became the next victim for 86 off 96 with 1 six and 7 fours and West Indies lost their fifth wicket at 215 in 37.4 overs. Kieron Pollard and Andre Russel tried to cope with the race as the first was unluckily run out for nine runs. Russell was the only batsman who stayed at the crease with aggression and was the eighth batsman who went back to the dressing room for 43 off 41 with 1 six and 6 fours as the entire team was bowled out for 290 with 15 balls to spare.

Australia won the third ODI with a margin of 39 runs and leads the five match series 3-0. The fourth game will be played on February 8, 2013, at Sydney Cricket Ground. 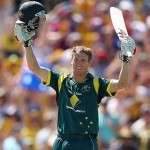 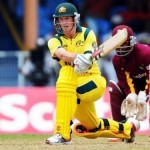 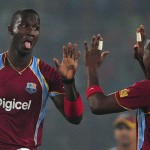