The Proteas got hold of the ordinary looking bowling of Pakistan with a masterly display of batting from the run machine, Hashim Amal, and AB de Villiers.

The hosts piled up 334 runs in 85 overs with four wickets in hand and AB de Villiers is still at the crease.

The third and final Test of the series started on Friday, February 22, 2013, at SuperSport Park, Centurion.

Graeme Smith, the skipper of South Africa, won the toss and came out to bat along with Alviro Petersen. Pakistan struck early as Rahat Ali got the first breakthrough by removing Petersen when the batsman was declared leg before wicket for 10 runs. Hashim Amla joined in next with Smith and the first hit a couple of fours in the fifth over. Smith became the first victim of the debutant quick bowler, Ehsan Adil for just five runs as the score reached 38 in 9.3 overs. Faf du Plessis got in the park and started the repair work with Hashim Amla who was going well at the other end.

Faf du Plessis hit 3 fours in the 16th over and Hashim Amla followed him with two in the 19th. The duo kept on consolidating as Hashim Amla dispatched his 27th Test fifty in the 25th over. The third wicket partnership took the score to 107 in 28.3 overs when when Faf du Plessis was caught behind by the wicket keeper, Sarfraz Ahmed, off Ehsan Adil for 29 runs. The batsman in form, AB de Villiers, associated next with Hashim Amla and the run rate was picked up instantly by them. The latter was the most aggressive of the two and added another 2 fours in the 33rd over.

The Pakistani captain, Misbah-ul-Haq deployed six bowlers to separate the partnership but was unable to penetrate as Amla survived a caught behind review at 90 in the 45th over. Hashim Amla was unluckily caught behind by Sarfraz Ahmed off Rahat Ali for 92 from 128 balls with 13 fours. The fourth wicket fell at 186 in 46.3 overs and the next batsman Dean Elgar lost his wicket for seven runs after the addition of 10 runs to the total. Robin Peterson took guards in the center and the second hundred of the innings was displayed on board in the 51st over.

AB de Villiers scored his 33rd Test half century with style with a four over the mid-off boundary as Peterson was batting well at his end. The boundaries were witnessed at regular intervals and the batsmen were finding gaps easily. The score reached at 248 when a misunderstanding between the two batsmen brought an end to Peterson who was run out by a direct throw from Mohammad Irfan for 28 runs. Vernon Philander dropped in next to bat next as the visitors looked like folding the innings of the hosts.

Philander got his first four in the 67th over as de Villiers kept on cruising briskly form the other end. The supreme off spin bowler, Saeed Ajmal, was unable to create any problems for the batsmen during the day and was handled well by the pair as well. The Proteas hammered 334 runs for the loss of six wickets in 85 overs at the close of the first day’s play. AB de Villiers was just two runs away from his 16th Test ton and Vernon Philander was batting at 45 runs.

Rahat Ali was the top wicket taker with three, Ehsan Adil held two whereas no other bowler got any success.

South Africa is in a strong position already and an addition of another 100 runs will put them on the driving seat. 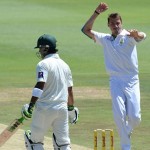 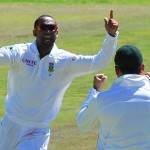