South Africa made an impressive all round performance in the third and Final Twenty20 while crushing the visiting New Zealand by 33 runs and won the series 2-1.

The Proteas hammered 179 runs for the loss of six wickets at the end of the measured 20 overs. The Kiwis managed 146 runs with just one wicket left in their allotted quota of overs.

Henry Davids (South Africa) was declared ‘Player of the match’ for his brilliant batting while opening the innings.

The third and final Twenty20 of the series was played on Wednesday, December 26, 2012, at St George’s Park, Port Elizabeth.

Earlier, the skipper of South Africa, Faf du Plessis, won the toss, came into bat and lost his wicket for just one run. Quinton de Kock joined in next with Henry Davids who added 11 runs in the fourth over with 1 six and 1 four. Quinton de Cock was caught by Corey Anderson at mid off on the bowling of Ryan McClenaghan for two runs as the score touched 26 runs. Justin Ontong got together with Davids and both started picking up runs at regular intervals assisted by a few boundaries.

Henry Davids achieved his second T20 fifty in the 13th over and kept on cruising nicely. Justin Ontong hit the first six of his innings in the 12th over followed by another two three overs later. The pair enhanced the score to 115 in 14.5 overs when Ontong was gone for 48 off 30 balls with 3 huge sixes and 1 four. David Miller got in next and picked up 15 runs in the 16th over along with Davids comprising 1 six and 1 four. Henry Davids was finally caught by Anderson off McClenaghan for 68 from 51 deliveries with 2 sixes and 7 fours. Miller and Farhaan Behardien added 28 and 22 valuable runs respectively at a fast pace as the hosts smashed 179 runs with four wickets in hand at the end of the 20th over.

Mitchell McClenaghan and Doug Bracewell were the main wicket takers with two each whereas Ronnie Hira and James Franklin shared one wicket each.

The Black Caps lost their first wicket at six runs as their captain, Brendon McCullum, got together with Martin Guptill and they picked up 15 runs in the fourth over with 1 six and 2 fours. Guptill hit another 2 boundaries in the next over and looked like playing another good knock after his ton in the second T20. Both batsmen were going great guns when Guptil became the next victim for 24 off 20 with 1 six and 3 fours as the total touched 53 in 7 overs. Brendon McCullum followed him next after the addition of just three runs to the score at his personal feat of 25 from 22 balls with 1 six and 3 fours.

The South African bowlers kept on picking up the rival wickets at regular intervals and none of the incoming batsmen were able to get into twenties. Nathan McCullum and James Franklin were the other notable scorers with 17 and 16 runs accordingly as the visitors reached 146 for the loss of 9 wickets in 20 overs.

Ryan McLaren and Aaron were the main destructors with three wickets each whereas Robin Peterson and Rory Kleinveldt claimed one wicket each.

South Africa beat New Zealand convincingly with a margin of 33 runs and pocketed the series 2-1. 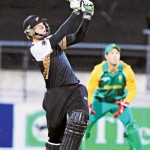 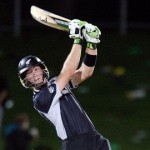