The old war horse of Pakistan, Younis Khan, plundered unbeaten double hundred and enhanced the chances of victory for his team vs. the hosts Zimbabwe.

The fourth day of the first Test came to an end on Friday, September 6, 2013, at Harare Sports Club.

Earlier, the visitors went into the game at 4-168 in 70 overs whereas Younis Khan and Asad Shafiq were unbeaten for 76 and 15 runs respectively. The latter was clean bowled on the fifth ball of the first over without adding any run to the overnight total and was replaced by Adnan Akmal. Younis Khan hit the first four of the day in the next over and survived at 83 in the 76th one. The duo added 10 runs three overs later with a couple of fours and the second hundred of the innings was posted on board in the 80th over.

Younis Khan smashed his 22nd Test century with another four on the last ball of the 85th one and Adnan Akmal continued creeping at his end. The batsmen kept on consolidating with regular boundaries and took the score to 258 without any further loss in 98 overs. Younis Khan was dropped at 117 in the 104th over while Adnan Akmal reached his 3rd Test fifty two overs later. The hundred runs partnership for the sixth wicket was completed in the 111th over and was dismantled at 287 as Adnan Akmal was run out for 64 off 154 deliveries with 8 fours.

Prosper Utseya picked three quick wickets and the 9th wicket was lost at 331when the last batsman, Rahat Ali got together with Younis Khan who touched the 150 runs mark in the 135th over. The first hit 1 six and 2 fours in the coming overs and the latter accumulated 12 runs in the 145th over with 1 six and 1 fours. Rahat Ali dispatched 2 sixes in the next one and the visitors went past 400 runs with a six from Younis Khan. The skipper of Pakistan, Misbah-ul-Haq, signalled Younis Khan that he can play another over for his double ton and the batsman achieved that with a grand six over midwicket. Younis Khan remained firm in the center with 200 off 404 comprising 3 big sixes and 15 fours, Rahat Ali was at the other end at 35 from 40 balls with 3 lofty sixes and even fours. Pakistan declared their second innings at 419 after utilising 149.3 overs with one wicket remaining after gaining an overall lead of 341 runs.

Tino Mawoyo and Vusi Sibanda opened the second innings for Zimbabwe and survived through the first seven overs. Mawoyo was declared leg before wicket off Saeed Ajmal for just two runs as the home side reached 1-13 in 7.3 overs when the play was called off for the day. 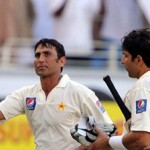 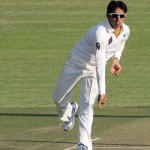 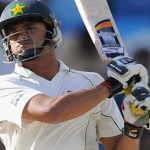