The Indian A skipper, Yuvraj Singh, proved his form with a blistering ton against the visiting West Indies A who lost the first unofficial ODI at Bangalore.

The Blue Shirts A powered 312 runs for the loss of just four wickets in the restricted 42 overs whereas the Caribbeans A were bowled out for 235 in 39.1 overs.

The first unofficial One Day International of the three match series was held on Sunday, September 15, 2013, at M Chinnaswamy Stadium, Bangalore.

Earlier, Kieran Powell, the captain of the West Indies A won the toss and opted to chase. The hosts lost their first wicket at 8 as Robin Uthappa and Mandeep Singh focussed on stabilising the innings. They scored 45 runs in the first 11 runs when the first was gone for 23 and Yuvraj Singh appeared in the park after a long absence. Mandeep Singh was scoring most of the runs with regular boundaries and reached his 10th List A fifty in the 22nd over including one six. Yuvraj Singh was playing a rather subdued innings, scored 21 runs on 38 balls and tasted his first four on the 39th one. The third wicket partnership was broken at 147 in 30.1 overs as Mandeep Singh was clean bowled by Nikita Miller for 67 off 78 balls with 1 six and 7 fours.

Yusuf Pathan joined in next with Yuvraj Singh who got his fifty on the 60th delivery he faced. There was a sudden change in the mood of the duo and especially Yuvraj Singh was the most fierce of the two. He punished Miller for 23 in the 35th over with 3 lofty sixes and 1 four and Pathan accumulated 26 runs two overs later comprising 3 big sixes and 2 fours. Yuvraj continued with his massacre by gathering another 24 runs in the 38th over with 2 sixes, 3 fours and blasted his 18th List A century as well. He was finally caught by Ronsford Beaton off Nkrumah Bonner for 123 from 89 mere balls with 7 sizzling sixes and 8 fours. Yusuf Pathan remained unbeaten for 70 off just 32 balls with 6 towering sixes and 4 fours as the home side hammered 4-312 in the required 42 overs.

Miguel Cummins, Andre Russell and Nkrumah Bonner were the only successful bowlers with one wicket each.

Bonner and Kieran Powell opened the innings for the Windies A smartly as the first hit 4 fours in two overs but was caught behind by Naman Ojha off Vinay Kumar for 16. The visitors surrendered a couple of wickets with little associations and were standing at 3-58 in 10.5 overs. Narsingh Deonarine and Andre Fletcher got together and the latter hit 2 fours in the next one followed by the same result from Deonarine in the 14th over. Fletcher dispatched the first six of the innings in the 16th over and the first hundred of the innings was displayed on the screen in the next one. The partnership was dislodged at 112 in 19.5 overs when Fletcher departed back to the dressing room for 29.

The hosts got rid of the two middle order batsmen in no time as Ashley Nurse associated with Deonarine who completed his 15th List A fifty in the 29th over. Nurse opted to attack and was sending the ball out of the fence at regular intervals while Narsingh Deonarine went back to the pavilion for 57 off 63 with 1 six and 6 fours. Ashley Nurse was the only batsman who attacked the rival bowling and the wickets kept on falling at the other end. He hit 2 sixes and 4 fours in the coming overs and smashed his maiden List A half century as well. Nurse became the 8th victim at his personal feat of 57 off 50 balls with 2 sixes and 6 fours and the  entire innings of the West Indies A team was folded back for 235 with 17 balls to spare.

Sumit Narwal, Vinay Kumar, Rahul Sharma and Yusuf Pathan were the top wicket takers with two each whereas Jaydev Unadkat claimed one wicket.

India A clinched the first unofficial One Day International by a good margin of 77 runs and leads the three game series 1-0. The second encounter will be held at the same venue on September 17, 2013. 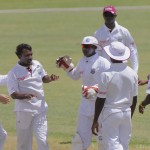 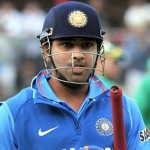 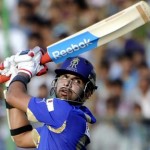 India A maintained the winning spree vs. New Zealand A – 2nd unofficial ODI