Thisara Perera ripped through the batting of Pakistan by his career’s best bowling and Tillakaratne Dilshan smashed unbeaten ton as Sri Lanka clinched the 2nd ODI.

Sri Lanka hammered 280 runs with six wickets in hand at the end of the scheduled 50 overs and Pakistan was bowled out for 204 runs with 22 balls to spare.

Thisara Perera (Sri Lanka) was declared ‘Player of the match’ for his magical bowling spell of 6-44 runs.

The second One Day International of the five match series was held on Saturday, June 9, 2012, at Pallekelle International Cricket Stadium.

Earlier, the Sri Lankan captain, Mahela Jayawardene, won the toss, elected to bat and sent in Upal Tharanga and Tillakaratne Dislhan to open the innings. They started off reasonably well and contributed 37 runs at the end of the seventh over and lost Tharanga on the first ball of the next over. Kumar Sangakkara joined in next with Dilshan and they got full use of the sloppy fielding exhibited by the Green Shirts while surviving a couple of run out chances.

Dilshan was the most attacking of the two and they took the score to 84 when Sangakkara was caught and bowled by Mohammad Hafeez for 18. Dinesh Chandimal was the next batsman who took guards in the centre, well supporting  Dilshan who scored his fifty on the last ball of the 23rd over with a four. The pace of scoring was lifted and 11 runs were accumulated in the 27th over with a couple of fours. The third wicket association produced 70 runs as Chandimal was declared leg before wicket for 32. Mahela Jayawardene entered the park and gathered nine runs in the 36th over with two fours as Dilshan kept on cruising at the other end.

Jayawardene was dropped by the wicketkeeper Sarfraz Ahmed off Saeed Ajmal in the 39th over. Tillakaratne Dilshan thrashed his century on the last ball of the 43rd over with a single and Jayawardene completed his fifty with a boundary in the 46th over but lost his wicket on the next ball for 53 off 45 balls with 8 fours. The fourth wicket was lost at 240 runs, Dilshan remained unbeaten for a majestic 119 off 139 deliveries with 1 six and 11 fours as the Lankan Lions piled up 280 runs at the end of the 50th over.

Sohail Tanvir, Shahid Afridi, Saeed Ajmal and Mohammad Hafeez were the successful bowlers with one wicket each.

The innings of Pakistan was initiated by Mohammad Hafeez and Azhar Ali and they were unable to put a run on the board in the first two overs. Hafeez opened his account with a four in the third over followed by a couple of fours by Azhar in the next over. Azhar demonstrated attacking cricket whereas Hafeez remained subdued and was caught and bowled by Thisara Perera for 14 off 29 balls.

The skipper, Misbah-Ul-Haq joined in with the smooth going Azhar and steadied the innings with caution. They accumulated 49 runs together when the first was declared lbw for 27 and that was the start of the disaster for the Green Shirts. The wickets started tumbling and Azhar became the fifth victim at 157 as he was unlucky to miss his maiden ODI ton by just four runs.

The Islander bowlers took over as Sarfraz Ahmed provided some resistance by scoring 20 runs when the innings of the Green Shirts was squeezed for 204 runs in 46.2 overs.

Thisara Perera was the star performer with the ball by grabbing his career’s best six wickets whereas Nuwan Kulasekara and Lasith Malinga ended up with two wickets each.

Sri Lanka won the second ODI by a huge margin of 76  runs and squared the five match series at 1-1. The third One Day International will be played on June 13, 2012 at R Premadasa Stadium, Colombo and both teams will try hard to take the lead in the series by winning that encounter. 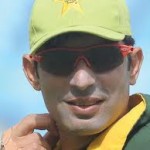