A captain represents his country on the cricket field. He makes it proud of the entity that it is, by winning matches on a regular basis. He perhaps works much harder than any cricketer in his team because he has to strategize and be involved in the well-being as well as the selection of the team in matches, and at the same time focus on the skill which he should good at.

Here are those players who have appeared in the most number of matches as captains in the ODI Cricket.

‘Punter’ undoubtedly tops this list, for being the captain of his side for close to a decade. Ricky Ponting was made captain in March 2002 after Steve Waugh was uncereminously dumped from the team, and within a year’s time, he led Australia to World Cup glory as they repeated their success of 1999.

Fortunately, in the first five years of his captaincy, Ponting had a strong team with him so he was more of a manager than a leader. But in the next five, he has had to contend with the retirements of greats such as Glenn McGrath, Matthew Hayden, Adam Gilchrist and Damien Martyn. Therefore, he had to turn into a mentor-cum-leader. It was his toughest test but still was remarkably successful, as after the 2007 World Cup, Australia also managed to defend their ICC Champions Trophy title in South Africa in 2009 and won series in India twice, England, New Zealand and West Indies.

Ponting’s last match as one-day captain was against India in the World Cup 2011 quarterfinal at Ahmedabad which ended in a defeat, having previously seen a 34-match winning streak in World Cup cricket under his leadership coming to an end against Pakistan in a group game. He has won 164 matches and lost 50 matches as captain, thereby having an amazing winning percentage of 76.38%.

Fleming was the first skipper to advocate the idea of ‘calculated aggression’ in New Zealand cricket. Therefore, it is no wonder that he is one of the most successful captains of all time in ODIs in the world, and not just in his nation.

He retired from ODI cricket altogether after the loss to Sri Lanka in the semifinals of the 2007 World Cup and ended his captaincy career with 98 wins and 106 losses in 218 matches with a winning percentage of 48.04%.

The short and stout Sri Lankan will go down as the finest captains Sri Lanka have ever seen, in their cricketing history. A fiery fellow he was, who would ‘successfully get under your skin’ according to former Australian skipper Mark Taylor. His aggressive style of captaincy changed the mindset of Sri Lanka going about playing their cricket and his moment in the sun was lifting the 1996 World Cup, after his team beat Australia in the final.

He also forged a fine partnership with Dav Whatmore, who was the coach of Sri Lanka for most of the time when Ranatunga led the side. As a result, legends such as Sanath Jayasuriya, Chaminda Vaas and Muttiah Muralitharan flourished under his captaincy.

He was the ODI captain of his side for a long 11 years and lost his position as ODI captain after a crushing defeat to India in a group game in the 1999 World Cup in England which effectively ended Sri Lanka’s hopes of defending the title. He finished with 89 wins and 95 losses in 193 matches with a winning percentage of 48.37%.

Allan Border is definitely one of the supreme leaders Australia have ever possessed in their cricketing history and by far the most gutsy one. He took over the leadership reins in 1985, at a time when Australian cricket was in turbulence, suffering many defeats and the team had to go in transition.

Following an Ashes defeat at home in 1986, not many would have given Border and his men the slightest chance of winning the 1987 World Cup which was held in India and Pakistan. However, Border was responsible in building a world champion unit for five years, as Australia put up gritty performances throughout the tournament with a tie against defending champions India and a semifinal win against Pakistan, being some of the highlights. As a perfect act of vengeance, Australia beat England in the final at Kolkata to win their first ever World Cup and here lie the roots in Australia’s ODI dominance from 1999 till date.

Border went on to captain the side till 1994, which included a poor 1992 World Cup at home. By the end of it all, he led Australia in 178 matches, winning 107 matches and losing 67 matches with an impressive winning percentage of 61.43%.

Azhar led India in the entire decade of the 90s, in almost all their matches played. Unfortunately, the team was not competitive enough with their bowling being weak, and Azhar being unsuccessful in being an inspiration towards them as India relied more on their batting firepower to win matches.

Yet he will go down as one of the most successful Indian captains in ODI cricket with 90 wins and 76 defeats in 174 matches, with a winning percentage of 54.16%. The highlights of Azhar’s captaincy being India reaching the World Cup 1996 semifinal before losing to Sri Lanka at Kolkata. And also the semifinal of the ICC Champions Trophy in 1998, in a tournament where they beat Australia in the quarterfinal. They also beat Australia in the Coca Cola Cup tri-series in the same year in Sharjah, involving New Zealand.

Azharuddin’s last match as ODI captain for India was against New Zealand at Nottingham in the 1999 World Cup, which the team lost and with it, they were knocked out of the tournament.

Smith would not only go down as the most experienced in terms of being ODI captain for South Africa, but also the most unfortunate one. He led a powerful and capable South African team without any glory at a world event from the period of 2003-2011.

His situational style of captaincy though has seen South Africa in the top 3 sides of world cricket for most of his reign and consistency is important after all, when it comes to judging a captain. He was also the leader of the South African side which chased down 434 against Australia at Johannesburg in 2006, with Smith contributing with 90 runs off just 53 balls.

Smith’s time as captain has been more positive than negatives for South Africa who were the semifinalists in the ICC Champions Trophy 2006 and the World Cup 2007 and won series in West Indies, New Zealand, Bangladesh and Pakistan. And not to mention, two home series wins against Australia.

His last match as captain was against New Zealand in Dhaka in the World Cup 2011 quarterfinal where South Africa choked yet again, to lose despite being the favourites to win the tournament. Smith’s captaincy saw South  Africa win 92 out of 150 matches and lose 51 of them, with a winning percentage of 64.23%.

Ganguly is credited for turning the tables around for Indian cricket in the 2000s decade, after the match-fixing scandal which rocked the cricketing world and it is because of him what India is today in the ODI format. An aggressive and uncompromising leader, he left no stone unturned to form a brash and confident looking ODI side with young players being backed time and again to perform well.

The first three years of his leadership saw India being runners-up in the ICC Champions Trophy 2000, joint winners of the next edition of the tournament in 2002 in Sri Lanka and runners-up yet again, in the 2003 World Cup in South Africa. They also won series in West Indies and England, when they were not expected to.

Ganguly was the first captain to lead India to an ODI series win in Pakistan. But that was the beginning of his downfall, as the team then suffered from injuries and that dented their confidence badly. As a result, India struggled from mid 2004 to mid 2005.

His last appearance as India captain was in a tri-series final against New Zealand in Zimbabwe which India lost. He has a better winning percentage of 53.52% after 147 matches, winning 76 matches and losing 66 matches.

Imran is one of the finest captains Pakistan could ever have, and one of the most inspirational captains in world cricket. It is because he was one of those rare Indian subcontinent leaders who embedded the idea of playing ‘selflessly’ in Pakistani colours, irrespective of the situation of the game.

Usually all-rounders are not successful captains, but Imran defied that theory in style as the outlook of Pakistan cricket changed under him ever since he took over the reins in 1982. Under him, Pakistan won more than they lost against archrivals India in Sharjah and came in the semifinals of the 1987 World Cup.

But he reached his peak in the 1992 World Cup, when at 35 he was the oldest captain to win the championships and one of the few captains to have given a grand send-off as he fittingly retired after the final against England. He was the man who advocated playing the young Inzamam ul Haq in the knockout stages and firing up the team, which actually felt like packing their bags to go home after reeling in the championship at one stage.

Although he will go down in cricketing history forever in the ‘Hall of Shame’ for being involved in the high profile match-fixing scandal in 2000 in a ODI series against India, Cronje does feature in the list of playing the most matches as captain in ODI cricket.

At his peak, he made South Africa one of the strongest one-day outfits in the 90s as it was under his captaincy that the team won the ICC Champions Trophy in 1998 in Bangladesh and the Commonwealth Games. They also were the semifinalists in the 1999 World Cup in England, before being knocked out by Australia.

He laid the foundation for South Africa to be a top one-day side in the 2000s decade with players such as Herschelle Gibbs, Mark Boucher, Shaun Pollock and Makhaya Ntini playing under him at the beginning of their careers.

His final match as captain was against Pakistan at Sharjah in 2000, ending with a staggering 99 wins in 138 matches, losing only 35 having a winning percentage of 73.70%.

Lara may not have been one of the greatest captains to have walked on the cricket field, but he did lead West Indies in 125 ODIs since the team did not any other player to take up this responsibility better than him.

He has had a fluctuation of captaincy stints as he led the team in 1994 for the first time, only three years after making his international debut. But the most memorable moment of his stewardship was to see West Indies win the ICC Champions Trophy in 2004 in England, where his underdog team came from behind to beat hosts England in the final even with there being deteriorating light. And also the Windies made it to the ICC Champions Trophy 2006 final in India before losing to Australia, but beating the likes of Australia in the group stages, India and South Africa.

He eventually quit ODI cricket as West Indies captain in a World Cup match against England incidentally at Barbados, which England won by 1 wicket and that knocked out his team from the tournament. Lara shockingly has a 50% winning percentage having won and lost 59 out of 125 matches, being captain. 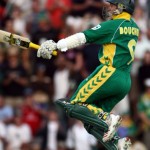