A top class performance from the West Indies openers and the lethal bowling spell of Ravi Rampaul let England down in the first match of the Super Eights, Group 1.

West Indies amassed 179 runs for the loss of five wickets at the end of the stipulated 20 overs and England managed 164 runs with six wickets in hand.

Johnson Charles was declared ‘Player of the match’ for his entertaining innings of 84 from 56 balls.

The 14th match of the ICC World Twenty20 was held on Thursday, September 27, 2012, at Pallekele International Cricket Stadium.

Earlier, Darren Sammy, the captain of West Indies, won the toss and opted to bat first on a perfect looking batting track. The young gun, Johnson Charles and the thundering batsman, Chris Gayle, provided their side with a flying start. The latter scored 14 runs in the second over with 3 fours and hit another 3 boundaries in the next two overs.

Gayle flexed his muscles in the eighth over by dispatching Samit Patel for 3 huge sixes. Charles got inspired by his fellow partner and opened his arms in the next over off Graeme Swann by hitting a couple of lofty sixes and one four. Chris Gayle achieved his 9th T20 fifty on 29 balls in the 10th over and the hundred of the innings was attained in style with a six from Gayle on the 3rd delivery of the following over from Swann.

Charles was dropped two balls later at long off by Steven Finn but Chris Gayle was gone on the very next ball for 58 scored on 35 deliveries with 4 sixes and 6 fours. Johnson Charles changed his gears by hitting a couple of fours in the 12th over and completed his Maiden T20 half century in the next over. He kept on piling up the runs with regular boundaries besides a little assistance from the other side.

Johnston Charles was finally caught at mid-on by Jonny Bairstow on the bowling of Jade Dernbach for 84 off 56 balls with 3 sixes and 10 fours. The Caribbeans hammered 179 runs with half of their side back in the pavilion at the close of the 20th over.

Stuart Broad was the most productive bowler with two wickets whereas Steven Finn, Jade Dernbach and Graeme Swann held one wicket each.

England had a dreadful start by losing their two top order batsmen in the first over on the consecutive balls as Ravi Rampaul struck early. Craig Kieswetter and Luke Wright were the suffering batsmen who could not even open their accounts. The promising youngster, Alex Hales who came in to open the innings was joined in by Jonny Bairstow and they tried to steady the ship.

Hales gathered 2 fours in the fourth over and hit the first six of the innings in the seventh over. The third wicket partnership took the score to 55 when Bairstow was gone for 18 and Eoin Morgan replaced him in the centre. Alex Hales notched his fifty in the 13th over with 1 six and 1 four as Morgan came at his own and sent the ball high over the ropes twice in the next two overs. The duo picked up the run rate and the ball was travelling to the boundary line regularly.

Eoin Morgan powered his fifty with a single which was posted on 25 balls. England needed 39 runs to win the game on the last 12 deliveries and Morgan lifted the ball twice over ropes in the 19th over. The target of 23 runs was hard to acquire in the last six balls as Alex Hales lost his wicket for 68 off 51 with 2 sixes and 5 fours. Eoin Morgan remained unbeaten for 71 off 36 mere deliveries which comprised 5 gigantic sixes and 4 fours as England reached 164 for the loss of just four wickets.

West Indies won the match by a margin of 15 runs and grabbed two important points. 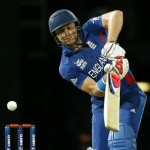 Luke Wright powered England to a comfortable win vs. Afghanistan 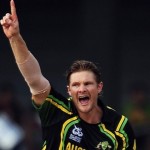 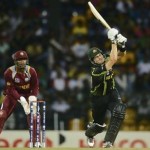 Australia tops Group B – Summary of the pool matches