Umar Gul and Umar Akmal saw Pakistan through to a difficult task when the odds were against them as South Africa lost a thrilling encounter in the Super Eights.

South Africa scored 133 runs for the loss of six wickets at the end of the metered 20 overs. Pakistan was in sight of losing the match as they were suffering at 7-76 in 14.3 overs. An astonishing 8th wicket partnership between Umar Akmal and Umar Gul guided their team to a superb victory as they smashed 136 runs with two wickets in hand in 19.4 overs.

Umar Gul (Pakistan) was declared ‘Player of the match’ as he tore apart the Proteas attack by hammering 32 off just 17 balls.

The 15th match of the ICC World Twenty20 was played on Friday, September 28, 2012, at R Premadasa Stadium, Colombo.

Earlier, the skipper of South Africa, AB de Villiers, won the toss and sent in the hard hitting batsman, Richard Levi and the in-form batsman, Hashim Amla to initiate the innings. The Green Shirts surprised the Proteas by inducting the young left arm spinner, Raza Hasan, in the first over. The batsmen foun it hard to get him away and Amla was dropped by the wicketkeeper Kamran Akmal on the last ball of the over and that could have been an easy stumping as well.

Hashim Amla was unable to utilise the chance and was caught in the cover by Shoaib Malik off Yasir Arafat for 6 on the fifth ball of the second over. The most experienced batsman of South Africa, Jacques Kallis, came in next and tried to force the scoring rate by hitting a six on the first ball of the fifth over. Saeed Ajmal destroyed the timber of Richard Levi and Jacques Kallis was caught at short cover by Shahid Afridi off Mohammad Hafeez for 12.

The proteas were in deep trouble by losing their three top order batsmen for 28 in 6.1 overs when Jean-Paul-Duminy and Farhaan Behardien got together in the park. The duo kept the score board moving with singles and twos but found it difficult to send the ball out of the fence frequently. The fourth wicket association took the score to 66 in 12.3 overs as Behardien was stumped by the keeper off Mohammad Hafeez for 18.

AB de Villiers joined in next with Duminy, the run rate was picked up instantly and the boundaries started flowing from the willows. Saeed Ajmal was hit for a couple of fours in the 17th over and de Villiers dispatched a six on the first ball of the following over off Umar Gul. AB de Villiers was caught by Imran Nazir on the very next ball for 25 scored on 18 balls with 1 six and 2 fours.

Jean-Paul-Duminy became the sixth victim after scoring 48 off 38 deliveries with 2 sixes and even fours as South Africa managed 133 runs with four wickets in hand at the end of the 20th over.

Yasir Arafat and Mohammad Hafeez were the highest wicket takers with two each as Saeed Ajmal and Umar Gul picked up one wicket each.

The Men in Green made a flying start as Mohammad Hafeez hit two fours in the first over off Dale Steyn and Imran Nazir followed him with the same result in the next over. Imran Nazir tried to maintain the rhythm but lost his wicket for 14 when he was caught behind by the wicketkeeper AB de Villiers off Steyn for 14 as the score reached 24 in three overs.

The left arm spinner, Robin Peterson, was introduced in the fourth over and he made a sensational start by grabbing two important wickets. Mohammad Hafeez and Nasir Jamshed were stumped smartly by AB de Villiers for 15 and 0 respectively and Pakistan was reeling at 3-31 after 3 overs. That was the beginning of the disaster for the unpredictable Pakistani team as the rival bowlers took over and the wickets started crumbling one after another.

Umar Akmal secured his end and witnessed the fall of the batsmen from his end as the Green Shirts lost their seventh wicket for 76 runs in 14.3 overs. Umar Gul dropped in the centre next and hit two back to back sixes in the 16th over off Jacques Kallis. Pakistan required 42 runs to win the match on the last 24 deliveries with three wickets in hand.

Umar Gul changed the complexion of the game by plundering 3 huge sixes and 2 fours on 12 balls he faced. The target was reduced to 15 in 12 balls as the scintillating eighth wicket partnership of 49 runs off 27 mere balls concluded on the last ball of the 19th over. Umar Gul was caught by Peterson off Dale Steyn for a marvellous innings of 32 from just 17 balls with 3 grand sixes and 2 sweetly timed fours.

The Men in Green needed 9 runs from the last six balls with two wickets remaining as Umar Akmal dispatched the second ball of the over for a six and Saeed Ajmal hit the winning four on the fourth ball. Umar Akmal remained unbeaten for 43 off 41 balls with 1 six and 4 fours as Pakistan scored 136 runs for the loss of 8 wickets with two balls to spare.

Dale Steyn was the star performer with the ball by grabbing three wickets, Robin Peterson held two whereas Johan Botha, Jean-Paul-Duminy and Jacques Kallis shared one wicket each.

Pakistan clinched the match with a margin of two wickets and earned two valuable points. 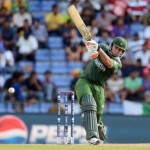