Eoin Morgan reiterated, there is nothing impossible in cricket if one has the courage. He hammered a galactic six on the last ball as England won the match.

India scored 177 runs for the loss of 8 wickets in the allocated 20 overs and England piled up 181 runs with six wickets in hand.

Eoin Morgan (England) was declared ‘Player of the match’ for his scintillating innings.

Yuvraj Singh (India) was declared ‘Player of the series’ for his excellent all round performance in two matches.

The second and final Twenty20 of the series was played on Saturday, December 22, 2012, at Wankhede Stadium, Mumbai.

Earlier, the captain of England, Eoin Morgan, won the toss and elected to field first as they suffered in the inaugural T20 while bowling second. India had a dismal start when Ajinkya Rahane was caught by the debutant Joe Root at third man off Jade Dernbach for three runs in the second over. Virat Kohli joined in next with Gautam Gambhir and the first scored 10 runs in the fourth over with 2 back to back fours.

Kohli hit a four on the first ball of the sixth over and became the highest run scorer of T20 cricket in 2012 cricket by surpassing the score of 417 earlier smashed by Brendon McCullum. That over from Luke Wright proved to be the expensive one until then as Kohli hit three consecutive fours on the last deliveries and 20 runs were added altogether. Virat Kohli was clean bowled by Stuart Meaker in the next over for 38 off just 20 balls with 7 fours. The second wicket was lost at 64 in 6.5 overs and Yuvraj Singh became the next victim seven runs later for four runs.

Gautam Gambhir was gone for 17 as the Blue Shirts reached 4-88 in 10.5 overs as the young duo of Rohit Sharma and Suresh Raina got together in the centre. The run rate slowed down a bit as the stumps of Sharma were uprooted by James Tredwell for 24 when the Indian skipper, MS Dhoni walked in the park and hit 2 fours in the following two overs. Raina punished Meaker for 19 runs in the 17th over comprising 1 six and 3 fours and Dhoni dispatched 18 runs in the next over off Dernbach with 2 grand sixes. MS Dhoni was caught by Samit Patel at midwicket off Bresnan for 38 from just 18 deliveries with 2 sixes and 3 fours. Suresh Raina remained unbeaten for 35 off 24 with 1 six and 3 fours as the Men in Blue thrashed 8-177 in 20 overs.

Jade Dernbach and Luke Wright were the top wicket takers with two wickets each whereas Tim Bresnan, Stuart Meaker and James Tredwell shared one wicket each.

England went into bat with Michael Lumb along with Alex Hales in an attacking mode by getting 12 runs in the first over. Lumb added 13 runs in the following over with 1 six and even four and Hales was dropped on the fourth ball of the next over at seven runs. Lumb carried on with his attack and hit 1 six and 2 fours in the next six deliveries and Hales got his first six in the 8th over. Michael Lumb smashed his maiden T20 fifty on the third ball of the same over as the score reached 79 after 11 overs.

The openers provided a solid stand of 80 runs when Lumb was stumped smartly by Dhoni off Yuvraj Singh for 50 from 34 with 2 lofty sixes and 6 fours. Luke Wright remained unimpressive as he was declared lbw off Yuvraj Singh for five runs as Eoin Morgan took guards. The run rate was maintained by the pair and they got 11 runs in the 14th over with 2 fours. Yuvraj Singh struck back again when he got rid of Alex Hales for 42 off 33 with 1 six and 4 fours. The third wicket was lost at 123 in 14.4 overs and the visitors required 51 from the last 30 balls.

Morgan was playing a captain’s knock as Samit Patel was dropped by Piyush Chawla off Parvinder Awana when the batsman had not opened his account. The Englishmen never gave up and kept on the chase alive as Samit Patel was caught by Gautam Gambhir at midwicket off Ashok Dinda for 9 on the fifth ball of the 18th over. Morgan sent the ball flying over the rope on the next delivery and the new batsman, Jos Buttler, sparkled with 12 runs in the 19th over with 1 supreme six and 1 four.

England needed 9 runs from the last six balls as the final over was bowled by Ashok Dinda. The thrill was multiplied in the game when the visitors were still three runs away from victory with one ball to spare. Eoin Morgan lifted the half volley of Dinda for a sizzling straight six over the bowler’s head and won the exciting match for England. Eoin Morgan plundered 49 runs from 26 mere balls with the assistance of 2 gigantic sixes and 5 well executed fours as Jos Buttler was at the other end for 15 off 7 with 1 six and 1 four. The tourists achieved the target by amassing 181 runs on the last ball of the match for the loss of just four wickets.

Yuvraj Singh was the most successful bowler with three wickets and Ashok Dinda added one wicket to his record.

England won the hair-raiser with a big margin of six wickets and levelled the series at 1-1. 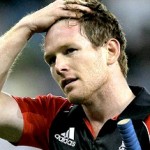 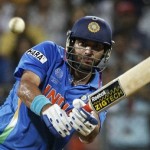