Pune Warriors tasted their 3rd victory of the tournament as their top order batting, led by Manish Pandey, clicked excellently and let down Kolkata Knight Riders.

Pune Warriors thrashed 170 runs with six wickets intact at the end of the scheduled 20th over and Kolkata Knight Riders were restricted to 7-163.

Manish Pandey (Pune Warriors) was declared ‘Player of the match’ for his dazzling knock of 66 runs.

The 65th match of the Indian Premier League was held on Wednesday, May 15, 2013, at JSCA International stadium Complex, Ranchi.

Gautam Gambhir, the captain of Kolkata Knight Riders, won the toss and invited Pune Warriors to bat first. Robin Uthappa along with his skipper, Aaron Finch, started off reasonably well by scoring 16 runs in the first two overs. Uthappa hit two sixes in the next over as Finch got a couple of fours until the end of the fifth one. Uthappa was clean bowled by Sachithra Senanayake for 25 and was replaced by Manish Pandey as Finch dispatched 2 back to back sixes in the 10th over. They added another 17 runs in the following over with 2 sixes as Lakshmipathy Balaji removed the bails of Aaron Finch for 48 off 32 balls with 3 mighty sixes and 2 fours.

Yuvraj Singh came in next as Pandey gathered 3 consecutive fours in the 15th over and Yuvraj Singh tasted his first six in the 17th over. Manish Pandey smashed his second fifty of the tournament in the 18th over with 2 fours and was run out for 66 off 47 with 1 six and 8 fours. Yuvraj Singh was caught by Ryan ten Doeschate at long-on at the bowling of Jacques Kallis for 30 off 20 deliveries with 3 skied sixes. Pune Warriors scored 170 runs for the loss of just four wickets after the last ball of the 20th over was bowled.

Kolkata Knight Riders lost their first wicket at 17 when Manvinder Bisla was declared leg before wicket off Wayne Parnell for one. They faced another blow when the stumps of Jacques Kallis were uprooted by Parnell again for just one run. Gautam Gmbhir was caught by Yuvraj Singh off Ishwar Pandey for 12 and KKR was struggling at 3-29 in 4.4 overs. Yusuf Pathan and Ryan ten Doeschate associated while their team was in crisis and the first got off with 2 fours in the seventh over. The duo did not surrender and accumulated 29 runs in the coming three overs with 1 six and 3 fours and reached 74 on the half way mark.

The hundred of the innings was displayed on board on the first ball of the 13th over with a four from Doeschate. Pathan continued with his assault by sending the ball twice over the rope in the next over and attained his second half century of the event in the 15th over. The fourth wicket partnership was broken at 127 in 15.5 overs when Ryan ten Doeschate was unluckily run out for 42 off 30 balls with 1 six and 4 fours. Manoj Tiwary became the next victim one run later without scoring any run as Debabrata Das walked in next at the crease.

The willow of Yusuf Pathan was in full swing as he punished Parnell for 1 six and 2 fours on three deliveries of the 18th over. Pathan had to leave (obstructing the field) when he was cruising well at 72 off 44 mere balls with 2 lofty sixes and 8 fours. KKR required 23 runs from 19 deliveries when Rajat Bhatia joined in with Das who was run out for 10. Das secured his end for 8 as Kolkata Knight Riders managed 163 with three wickets remaining in 20 overs.

Wayne Parnell was the main wicket taker with two whereas Bhuvneshwar Kumar and Ishant Pandey claimed one wicket each.

Pune Warriors won their second game of the tournament while defeating KKR by a margin of just seven runs. 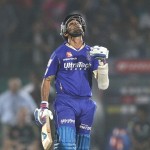 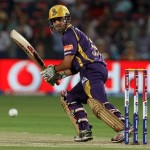 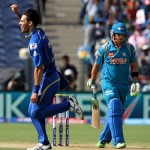