Suresh Raina well assisted by Michael Hussey, toyed with the bowling of Sunrisers Hyderabad as Chennai Super Kings maintained their supremacy in the IPL 2013.

Suresh Raina (Chennai Super Kings) was declared ‘Player of the match’ for his aggressive unbeaten knock of 99 from 52 mere deliveries.

The 54th match of the Indian Premier League was held on Wednesday, May 8, 2013, at Rajiv Gandhi International Stadium, Uppal, Hyderabad.

The toss was won by the Sunrisers Hyderabad skipper, Kumar Sangakkara, who sent the rival team in to bat first. Michael Hussey along with Murali Vijay started off slowly by scoring 13 runs in the first three overs with 2 fours from the first. Vijay got 2 fours in the next over and hit 3 back to back sixes in the fifth one to Ishant Sharma. He was caught behind by Parthiv Patel off Thisara Perera for 29 and was replaced by Suresh Raina who added 24 runs with Hussey in the coming overs comprising 2 sixes and even fours. The score board was moving fast and the score went past the hundred runs mark in the 11th over.

Suresh Raina was dropped at 26 by Karan Sharma off Amit Mishra in the next over as Michael Hussey completed his fifty off 32 balls in the 13th over. Suresh Raina got his half century in the 16th over and blasted 23 runs in the 17th over off Sharma with 1 six and 4 fours as the second wicket partnership was extended to 178 in 17.2 overs. They accumulated 133 runs in just 72 deliveries when Michael Hussey was clean bowled by Perera for 67 off 42 with 4 lofty sixes and 5 fours. MS Dhoni scored four runs before he became the third victim of Perera as Suresh Raina secured his end for 99 from 52 balls with 3 big sixes and 11 fours. Ravindra Jadeja was at the other end for 10 as Chennai Super Kings amassed 3-223 in 20 overs.

Sunrisers Hyderabad lost their first wicket at 11 when Shikhar Dhawan was gone for three. Kumar Sangakkara got together with Parthiv Patel who added 11 runs in the third over with a couple of fours. The latter was the more aggressive of the two and hit another 16 runs in the fifth over with 1 six and 2 fours. Sangakkara remained unimpressive and lost his wicket for three and Patel was the fifth batsman who went back to the dressing room for 44 off 30 with 1 six and 6 fours.

The home team was struggling at 5-64 after 9 overs when Thisara Perera and Karan Sharma associated in the park. The pair hit 23 runs in the following two overs with 1 six and 3 fours as Perera got another six in the 13th over but was caught by S Badrinath off Dwayne Bravo for 23. Sharma was the only other batsman who fought hard and stood firm at his end for 39 off 33 with 1 six and 3 fours as Sunrisers Hyderabad reached 8-146 when their quota of 20 overs finished.

Mohit Sharma was the top wicket taker with two whereas Ravichandran Ashwin, Suresh Raina, Chris Morris and Dwayne Bravo shared one wicket each.

Chennai Super Kings humiliated the hosts with a wide margin of 77 runs and they are ruling the tournament with 20 points from 13 games after losing three of them. 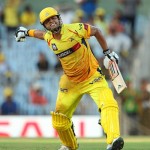