The Black Caps continued their dominance over the Blue Shirts as Ross Taylor, Kane Williamson and the debutant, Matt Henry, sparkled for the home side.

The hosts hammered 303 runs for the loss of just five wickets in 50 overs and the visitors were bowled out for 216 with two balls to spare.

Ross Taylor (New Zealand) was declared ‘Player of the match’ for his brilliant hundred.

The fifth and final One Day International of the series was played on Friday, January 31, 2014, at Westpac Stadium, Wellington.

Earlier, MS Dhoni, the captain of India, won the toss, preferred to chase and got two early wickets at 41. Kane Williamson and Ross Taylor set the tone for the big innings with regular boundaries while the first attained his consecutive fifth fifty in the 30th over. The latter got his half century in the next one and the partnership was dislodged at 193 when his partner departed for 88 from 91 with 1 six and 8 fours. Ross Taylor continued cruising and powered his back to back hundred with a four and was gone for 102 off 106 balls with 1 six and 10 fours. James Neesham remained unbeaten for 34 while the Kiwis piled up 5-303 in 50 overs.

Varun Aaron was the top wicket taker with two whereas Mohammed Shami, Bhuvneshwar Kumar and Virat Kohli shared one wicket each.

The Men in Blue had an awkward beginning by losing their three top order batsmen for 30 mere runs in 13.2 overs. Ambati Rayudu joined in with Virat Kohli, they took the score to 78 when the latter surrendered his wicket for 20 and was replaced by his skipper. Kohli was in good nick, reached his 30th ODI fifty with his 5th four and enhanced the run rate with few more boundaries. He was finally dismissed at 145 for 82 off 78 deliveries comprising 3 lofty sixes and 7 fours. The lower order batting of the Blue Shirts was unable to resist against the quality bowling and Dhoni became the 8th casualty for 47 whereas the entire side was dismissed for 216 in 49.4 overs.

Matt Henry was the star performer in his first game with four wickets, Kyle Mills and Kane Williamson held two each whereas James Neesham and Nathan McCullum chipped in with one wicket each.

New Zealand triumphed in the final ODI by a hefty margin of 87 runs and grabbed the one side series at 4-0. 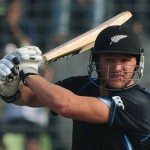 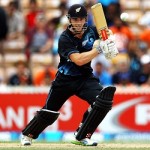 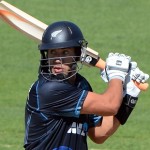