The Australian quickie, Josh Hazlewood, penetrated through the batting line up of England whereas George Bailey and Cameron White crushed the visitors’ bowling.

The tourists managed 130 after losing nine wickets in 20 overs and the Kangaroos powered 131 with eight wickets in hand and 31 balls to spare.

Josh Hazlewood (Australia) was declared ‘Player of the match’ for his lethal fast bowling in the game.

The second Twenty20 of three match series was held on Friday, January 31, 2014, at Melbourne Cricket Ground.

Earlier, Stuart Broad, the skipper of England, won the toss and preferred to bat first. Alex Hales along with Michael Lumb started off briskly but lost their wickets at 30. That was the beginning of the disaster by Hazlewood and the home bowlers never looked back from there. The wickets kept on sliding at regular intervals and Jos Buttler was the top scorer with 22 as the English side crept to 9-130 in the required overs.

Josh Hazlewood earned his career’s best figures of 4-30 whereas Nathan Coulter-Nile, Mitchell Starc and James Muirhead shared one wicket each.

The in-form batsman of Australia, Cameron White, and Aaron Finch began the chase in a commanding manner by scoring 48 in five overs. The latter was declared leg before wicket for 10 on the very next ball and the incoming batsman, Glenn Maxwell, was dismissed for just two. George Bailey, the captain of the Aussies, walked in next and punished Jade Dernbach for 18 runs in the 12th over with 1 six and 3 fours.

White attained his fifth T20 fifty on the 39th ball and Bailey rushed to his half century on the 24th one. The duo remained unbeaten for 58 and 60 respectively as the Kangaroos amassed 131 with eight wickets intact in 14.5 overs. Tim Bresnan and James Tredwell were the only successful bowlers with one wicket each.

Australia won the one sided encounter with a massive margin of eight wickets and leads the series at 2-0. 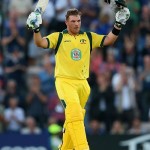 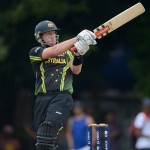 Australia triumphs in the opening T20 vs. England