The strong Australian side humiliated the depleted English unit by winning the 3rd T20 well led by an attacking unbeaten knock of 49 from 20 by George Bailey.

The Kangaroos piled up 195 for the loss of six wickets in 20 overs and the innings of the visitors was squeezed for 111 mere runs with 16 balls to spare.

George Bailey (Australia) was declared ‘Player of the match’ for his astonishing unbeaten innings of 49.

The third and final Twenty20 of the series was played on Sunday, February 2, 2014, at Stadium Australia, Sydney.

Earlier, George Bailey won toss for the home side, sent in Cameron White and Aaron Finch to open the innings. They scored 24 runs in four overs and the latter was dropped at 8 by Chris Jordan. Finch utilised the chance by hitting 3 sixes and lost his wicket at 48 after scoring 30 while the next wicket fell at 65. Ben Cutting and White shared a brisk 43 runs partnership off 30 balls when the first surrendered his wicket for 29. White followed him at 130 for 41 and the Aussies were 6-139 in 15.6 overs. Bailey walked in next and changed the complexion of the game with smart hitting. He dispatched the ball all around the ground and powered 26 runs in the last over with 2 lofty sixes and 3 fours. Bailey remained unbeaten for 49 comprising 3 giant sixes and 4 fours as the hosts hammered 6-195.

Stuart Broad was the highest wicket taker with three wickets whereas Chris Jordan and Joe Root shared one each.

The Englishmen had a dreadful beginning when their three top order batsmen went back to the pavilion at 25 in 4.6 overs. Joe Root along with Eoin Morgan tried to consolidate the innings with few boundaries and took the score to 60. Root was dismissed at that point for 11 and his partner became the sixth victim at 82 for 34. The lower and middle order batting collapsed again and the entire England team was bowled out for 111 in 17 overs.

Nathan Coulter-Nile, Glenn Maxwell and James Muirhead were the top wicket takers with two each whereas Mitchell Starc, Ben Cutting and Daniel Christian held one wicket each.

Australia triumphed in the last encounter with a hefty margin of 84 runs and white washed the series at 3-0. 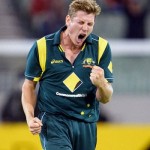 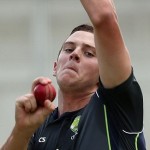 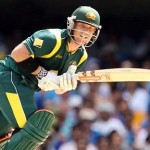