The visiting New Zealanders made their first impact while beating Derbyshire on day three with a huge margin that will boost their confidence against England.

New Zealanders scored 289 for the loss of five wickets in 76 overs in their first innings and 199 after 48 overs with five wickets remaining in the second when their skipper, Kane Williamson, declared the innings twice to provide his bowlers a bowling practice before the upcoming series against the hosts England.

Derbyshire was bowled out for 154 in 52 overs in the first innings and managed 227 in the second when they surrendered after utilising 67.4 overs.

The three day tour match concluded on Monday, May 6, 2013, at County Ground, Derby.

Earlier, Derbyshire started the day while chasing a target of 335 runs to win the match and their second innings was opened by Billy Godleman and Chesney Hughes. They scored 17 runs in the first seven overs as both batsmen hit 2 fours each in the following overs and took the score to 42 when Hughes was gone for 15. Godleman was declared leg before wicket off Neil Wagner for 25 after the addition of five runs to the total. Their captain, Wayne Madsen, and Wes Durston tried to consolidate the innings and they were sending the ball out of the rope continuously.

The score was enhanced to 80 when Madsen lost his wicket for just six runs as Dan Redfern joined together with Durston who became the next victim at 84 at his personal contribution of 26 runs. The hosts were 5-98 in 32.1 overs as Richard Johnson associated with Redfern who opted to attack and the boundaries were flowing from his willow. Dan Redfern achieved his fifty in the 43rd over with 3 back to back fours and the score was enhanced to 156 when Johnson was caught behind by Watling off Wagner for 14. The later was replaced by Peter Burgoyne as the flow of runs was checked by the visiting bowlers.

Redfern was the seventh batsman who went back to the dressing room for 58 off 70 balls with 12 fours as the total touched 165 in 50.2 overs. Burgoyne fought well for quite some time as the wickets kept on crumbling at the other end and he was finally caught behind by Watling off Neil Wagner for 30. Mark Footitt was the only other batsman who got few runs by scoring 22 as the entire team was sent back to the pavilion for 227 in 67.4 overs.

The tourists clinched the match against Derbyshire by a good margin of 107 runs and New Zealand began their tour of England on a high note. 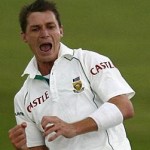 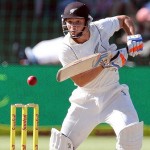 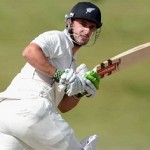