Royal Challengers Bangalore piled up 190 runs for the loss of three wickets in the measured 20 overs and Kings XI Punjab hammered 194 with six wickets intact and 12 balls to spare.

David Miller (Kings XI Punjab) was declared ‘Player of the match’ for his blistering unbeaten knock of 101 from 38 mere balls.

The 51st match of the Indian Premier League was played on Monday, May 6, 2013, at Punjab Cricket Association Stadium, Mohali, Chandigarh.

The skipper of Kings XI Punjab, David Hussey, won the toss and offered the batting to Royal Challengers Bangalore. Cheteshwar Pujara and Chris Gayle opened the innings in an aggressive mode by scoring 23 runs in the first three overs. The duo added 35 runs in the next two overs with 2 lofty sixes from Gayle and 5 fours from both and carried on with their offensive batting in the overs to come. Chris Gayle powered his fifty on just 27 balls and the first wicket contributed 102 runs in 11.2 overs. Gayle was clean bowled by Manpreet Gony for 61 off 33 deliveries with 3 big sixes and 6 fours.

Virat Kohli, the captain of Kings XI Punjab, came in next as Cheteshwar Pujara attained his half century in the 14th over with a couple of fours. Pujara lost his wicket to Gony for 51 off 48 with 8 fours at 133 and Kohli was caught by Shaun Marsh off Parvinder Awana for 14 after the addition of 11 runs to the total. AB de Villiers and Moises Henriques got together and kept the score board busy with continuous boundaries. They punished Michael Neser for 21 runs in the final over comprising 1 six and 3 fours as the visitors scored 190 with seven wickets in hand.

Kings XI Punjab lost an early wicket at 13 as Gurkeet Singh joined in with Mandeep Singh who became the next victim at 25 after scoring 16 runs. David Hussey walked in next as Gurkeet Singh got 2 fours in the sixth over and the score reached 51 in 7.4 overs. The latter was declared leg before wicket off Murali Kartik for 20 and Hussey was caught by Moises Henriques off Kartik for 13 and the home side was reeling at 4-64 in 9.5 overs. David Miller and Rajgopal Satish got together at a difficult situation as the latter was dropped at seven by Gayle off Vinay Kumar in the 14th over.

David Miller took over from there and changed the complexion of the game within no time. He added 15 runs in the 14th over with 1 six and 2 fours and toyed with RP Singh in the following over by plundering 2 sixes and 3 fours. Boundaries were showering from the bat of Miller at will and he continued murdering the rival bowlers. He added another 2 sixes and even fours in the coming overs as Sathish joined him with 1 six and 2 fours in the 18th over. David Miller thrashed his century in style by dispatching the last delivery of the 18th over for a six and won the match for the hosts as the score board displayed 4-194. Miller remained unbeaten for 101 off just 38 balls with 7 giant sixes and 8 fours and Rajgopal Sathish secured his end with 27.

Murali Kartik was the top wicket taker with two whereas Ravi Rampaul and Vinay Kumar held one wicket each.

Kings XI Punjab triumphed in the encounter with a big margin of six wickets and took their points to 10 from 11 games. 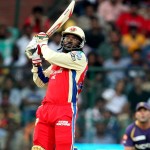 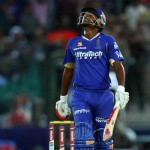