South Africa humiliated Pakistan by defeating them consecutively in the third Test with a combined team work as the visitors faced a whitewash in the series.

The Proteas blasted 409 runs in the first innings and Pakistan was bowled out twice for 156 and 235 runs in their two innings.

Kyle Abbott (South Africa) was declared ‘Player of the match’ for his wonderful bowling in his debut match. He crushed the Pakistani batting while grabbing 7-29 in the first innings followed by 2-39 in the second.

AB de Villiers (South Africa) was announced ‘Player of the series’ for his outstanding batting and wicket keeping. He was the top scorer from either sides by plundering 352 runs at an awesome average of 88.00, the best of 121 with two fifties.

The third and final Test of the series concluded on day three on Sunday, February 24, 2013, at SuperSport Park, Centurion.

Earlier, Pakistan commenced the day at 1-14 in 9 overs whereas Azhar Ali and Younis Khan were struggling at 5 and 8 runs respectively. The careful batting from the duo continued and they reached 35 after 16 overs. Younis Khan was caught by Graeme Smith at first slip off Dale Steyn for 11 off 46 balls with 1 four. Imran Farhat came in next and opened his account with a four on the second ball he faced as Azhar Ali kept his cool from the other end.

The pair tried to consolidate the innings but found it difficult to score the runs freely against the lethal bowling attack of the Proteas. They went back to their shells and tried to defend maximum deliveries and supported the hosts taking charge of the game. The fifty runs partnership was witnessed in the 38th over and they lifted the score to 92. Azhar Ali ran himself out for 27 when the things started looking bright for the visitors. The first hundred of the innings was posted on board in the 41st over as Imran Farhat became the next victim at 107 after scoring 43 off 91 with 5 fours.

The Pakistani captain, Misbah-ul-Haq, and Asad Shafiq went back to the dressing room cheaply for 5 and 6 runs respectively. The visitors were reeling at 6-114 in 49 overs when Sarfraz Ahmed and Saeed Ajmal gave some resistance against the lethal bowling of the Proteas. The score board started moving with occasional boundaries as Saeed Ajmal dispatched the only six of the innings to Robin Peterson in the 55th over. The boundaries were being scored regularly by the batsmen and they added 14 runs in the 59th over with 3 fours. The seventh wicket partnership was enhanced to 183 when Saeed Ajmal was declared leg before wicket off Dale Steyn for 31 off 57 deliveries with 1 six and 4 fours.

The score went past the 200 runs mark in the 69th over as Sarfraz Ahmed was caught superbly by Dean Elgar near third man off Dale Steyn for 40 from 45 with 6 fours. The next two wickets fell at 202 as the last pair of Rahat Ali and Mohammad Irfan made few runs before Rahat Ali was adjudged lbw for 22 off 27 with 5 fours. The innings of the entire Pakistani team was folded back for 235 runs in 78 overs.

South Africa won the third Test comprehensively with a gigantic margin of an innings and 18 runs and clinched the series 3-0. Graeme Smith, the skipper of the Proteas achieved the unique distinction of winning 50 Tests as a leader. 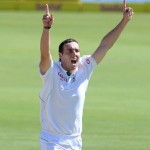 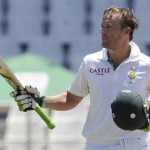