Michael Clarke led his side from the front with a gallant unbeaten ton as Chris Rogers and Steven Smith rose to the occasion with their solid batting vs. England.

The Kangaroos hammered 303 runs for the loss of just three wickets after availing a full quota of 90 overs on day one.

Earlier, Michael Clarke, the captain of Australia, won the toss and opted to bat first with the zeal to come back into the series. Shane Watson along with Chris Rogers opened the innings confidently by scoring 39 runs in 10 overs with 6 fours. Rogers was the most aggressive of the two by getting 4 fours as compared to Watson who shared two until then. Chris Rogers added another six boundaries in the following overs and achieved his second Test fifty on just 49 balls. Shane Watson was caught at that point by the English skipper, Alastair Cook, at first slip off Tim Bresnan for 19 as the score reached 76.

Usman Khawaja walked in next, took his time to settle down and scored his first run on the 13th delivery he faced. He was unluckily caught behind by Matt Prior off Graeme Swann, even after the review at the same score and the visitors lost their second wicket at 82. Michael Clarke joined in next with Rogers who preferred to carry on with his offensive innings. The pair enhanced the score to 129 after 37 overs when Chris Rogers was declared leg before wicket off Swann for 84 from 114 balls with 14 fours.

Steven Smith associated with Clarke once again in a demanding situation and they added just six runs in the following three overs. The latter hit two back to back fours in the next one and completed his half century with a four in the 44th over. Smith kept on securing his end but survived a huge appeal of caught behind as the review of England was turned down by the third umpire in the 50th over. The batsmen did not look behind after that and the second hundred of the innings was posted nine overs later.

Michael Clarke was enjoying his time in the middle and his willow was showering the boundaries at will while Smith hit two consecutive fours in the 71st over. The Australian skipper plundered his 24th Test hundred in the 77th over and Steven Smith attained his fifth Test fifty in the 79th one. Alastair Cook utilised six bowlers to dislodge the solid partnership but remained unsuccessful. Michael Clarke brought his side back in the competition and cemented his end for 125 off 208 deliveries comprising 17 fours whereas Steven Smith was at the other end at 70 with 7 boundaries as the Kangaroos amassed 3-303 in 90 overs.

Greame Swann was the most successful bowler with two wickets and Tim Bresnan held one.

Australia is in a commanding position at the moment and an addition of 150-200 runs to the total will put them on the driving seat. 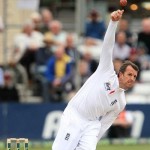