A strong comeback from the Australian batsmen well led by their skipper, Michael Clarke, and two wickets at the end of the 2nd day put them on top vs. England.

The Kangaroos declared their first innings after amassing 527 for the loss of just seven wickets in 146 overs and England lost their two wickets for 52 in 30 overs.

Earlier, the visitors commenced the day at 3-303 in 90 overs whereas Michael Clarke and Steven Smith were unbeaten on 125 and 70 runs respectively. They had quiet beginning by scoring nine runs in the first six overs as Clarke hit two consecutive boundaries in the 97th over. The pair crawled to 343 when there was a rush in blood by Steven Smith and he was caught by Jonny Bairstow off Graeme Swann for 89 from 196 balls with 8 fours. David Warner was unable to impress, he lost his wicket for just five runs and was replaced by Brad Haddin.

Clarke carried on with his aggressive batting while hitting boundaries at  regular intervals and Haddin was dropped at 10 by the wicketkeeper Matt Prior off James Anderson. The fourth hundred of the innings appeared on board in the 119th over while both batsmen kept the fielders busy in the park. Michael Clarke was finally clean bowled by Swann after contributing a majestic knock of 187 from 314 deliveries comprising 23 well timed fours. The sixth wicket fell at 427 and Peter Siddle was removed for one after the addition of three runs to the total.

Mitchell Starc joined in with Haddin and they took the score to 460 in 134 overs while the first accumulated 11 runs in the next one with a couple of fours. Brad Haddin smashed his 12th Test fifty with a single as Starc was punishing the bowlers at his side and achieved his third Test half century with 2 fours in the 142nd over. Haddin and Starc occupied the crease with 65 and 66 runs when Michael Clarke declared the first innings at 7-527 after utilising 146 overs.

Graeme Swann was the supreme bowler with five wickets whereas Stuart Broad and Tim Bresnan shared one wicket each.

The English captain, Alastair Cook went in to open the innings along with Joe Root and scored 21 runs in 10 overs with 3 fours from the first. Root was playing a lazy knock, he managed just one run on the first 40 balls he faced and tasted his first boundary on the 48th one. He was caught behind by Haddin off Peter Siddle for 8 as the score reached 47 and the night watchman, Tim Bresnan, became the next victim off the same bowler after scoring one run. The hosts reached 2-52 in 30 overs at stumps on day two whereas Cook was batting at 36 and Jonathan Trott scored 2.

England is still 475 runs behind the first innings total of Australia and a couple of early wickets on day three will put them on back foot. 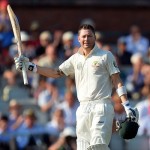 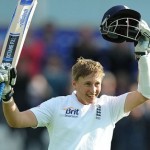