Yuvraj Singh punished the Australian bowling at will and demonstrated a magnificent match winning knock as India won the only T20 against Australia at Rajkot.

The Kangaroos scored 201 runs with three wickets in hand at the end of the measured 20 overs and the Blue Shirts hammered 4-202 with two balls still available.

Yuvraj Singh (India) was declared ‘Player of the match’ for his sparkling unbeaten innings of 77 from 35 mere balls.

The only Twenty20 between the two teams was played on Thursday, October 10, 2013, at the jam packed Saurashtra Cricket Association Stadium, Rajkot.

Earlier, MS Dhoni, the captain of the Blue Shirts, won the toss and offered the batting to the visitors on a good looking strip. The innings was opened by Aaron Finch along with Nic Maddinson in an aggressive manner and both of them got off with a boundary. Maddinson was in a dangerous mood and dispatched 4 fours in the third over off Ravichandran Ashwin followed by another six and a four in the following one. He was clean bowled by Bhuvneshwar Kumar for 34 off just 16 balls with 1 six and 6 fours as the score rushed to 56 in 4.5 overs.

Finch hit 1 six and 3 fours in the next two overs whereas a couple of wickets went down in no time. Shane Watson was declared leg before wicket off Vinay Kumar for six on the second delivery of the 8th over and the Australian skipper, George Bailey, was gone three balls later for a duck. Aaron Finch rushed to his second T20 fifty with another four whereas the newcomer, Glenn Maxwell, dispatched three lofty sixes in the 10th over off Ashwin. The latter became the next victim at 124 in 11.3 overs for 27 off 13 with four towering sixes. Finch continued with his onslaught and finally Vinay Kumar held a bullet like catch at his own bowling and dismissed the batsman for 89 off 52 with 1 six and 14 fours. The incoming batsmen made a little contribution as the Aussies reached 7-201 after the last ball of the 20th over.

Bhuvneshwar Kumar and Vinay Kumar were the highest wicket taking bowlers with three wickets each whereas Ravindra Jadeja held one.

India went down by one wicket at 12 in 1.5 overs when Suresh Raina joined in with Shikhar Dhawan. The batsmen added 1 six and 5 fours in the coming overs as Suresh Raina was caught by Watson off Nathan Coulter-Nile for 19 while the total reached 50 in 5.3 overs. Virat Kohli appeared on the scene next, kept the chase alive with Dhawan and they sent the ball out of the fence at regular intervals. The score was pushed to 80 in 8.3 overs when Shikhar Dhawan was smartly stumped by Brad Haddin off Xavier Doherty for 32 from 19 balls with 5 fours. Kohli tried to boost up the runs rate but was caught by James Faulkner off Clint McKay for 29 from 22 deliveries with 1 six and 2 fours.

The Men in Blue were 4-100 in 11.1 overs when Yuvraj Singh and MS Dhoni kept the business going in a positive way. The first hit two consecutive sixes and one four in the 14th over off McKay followed by two boundaries in the next one. The Blue Shirts required 56 runs to win the game from the last 30 deliveries and Yuvraj Singh smashed his seventh T20 half century on the 25th ball he faced with a straight six. James Faulkner gave away 20 runs in the 17th over with a couple of big sixes from Yuvraj Singh. Dhoni hit the winning runs on the fourth ball of the last over and held his end for 24. Yuvraj Singh remained unbeaten for 77 off just 35 deliveries with 5 sizzling sixes and 8 sweetly timed fours as the hosts piled up 4-202.

Clint McKay was the top wicket taker with two whereas Nathan Coulter-Nile and Xavier Doherty claimed one each.

India triumphed in the only T20 against Australia by a big margin of six wickets and ruled the evening superbly. 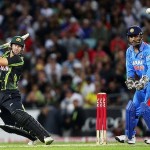 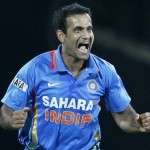 The re-emergence of a tiger – Irfan Pathan 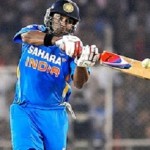