A solid unbroken partnership of 199 runs between Shaun Marsh and Steven Smith consolidated the position of their team against South Africa in the first Test.

The Kangaroos piled up 297 for the loss of four mere wickets in 90 overs at stumps on day one.

The first Test of the three match series commenced on Wednesday, February 12, 2014, at SuperSport Park, Centurion.

Earlier, Graeme Smith won the toss for the Proteas and invited the Aussies to bat first. The decision paid  dividends when the visitors lost their openers for just 15 runs as Shaun Marsh and Alex Doolan assembled at the crease. The first was dropped at 12 by Hashim Amla but his partner departed at 72 for 27 and was replaced by his skipper, Michael Clarke. The duo crept to 83 after 27 overs at lunch break but Clarke was dismissed for 23 after the resumption of the play.

The tourists were reeling at 4-98 when Steven Smith joined in with Marsh who went past his fifty in the 48th over. The run rate was picked up by the batsmen and they were sending the ball out of fence regularly. The second hundred of the innings appeared on board in the 64th one and Smith reached his 6th Test fifty with a four. Shaun Marsh kept on cruising and blasted his second Test fifty on the second delivery of the 71st over. The South African captain utilised six bowlers to dislodge the partnership but remained unsuccessful. Marsh remained unbeaten for 122 off 232 balls with 12 fours and Steven Smith cemented his end for 91 off 178 with 12 fours as the Kangaroos amassed 4-297 after 90 overs.

Dale Steyn was the highest wicket taker with two whereas Morne Morkel and Ryan McLaren shared one each.

Australia has taken command of the game from the first day of the match and they are heading for a mammoth score. 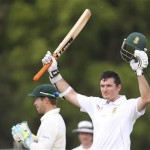 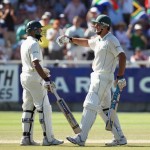